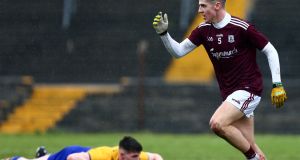 Galway will play Kerry in a St Patrick’s Day All-Ireland Under-20 football semi-final after they ran out 20-point winners over Roscommon in the Connacht final at Tuam Stadium.

This was as emphatic as the scoreline suggests - first-half goals from the excellent Tomo Culhane and Cian Monahan when Galway played into the powerful wind were decisive, before the hosts held Roscommon to a single point in a dominant second half.

Ryan Monahan was outstanding for Galway after the restart, he scored their third goal with Jonathan McGrath adding a fourth for the defending champions.

Roscommon got off to a great start when Ciaran Lawless pointed with the wind at his back after a minute, but they didn’t score again for 20 minutes despite the advantage of the elements. By then Culhane and Cian Monahan had hit the net, while Matthew Tierney and Tony Gill kicked good points.

Galway were 2-3 to 0-4 ahead at half time and three minutes after the break Ryan Monahan was quick to gather a rebound off the post to raise another green flag that ended the match as a contest.

McGrath’s fourth was a fortunate score that crept under the crossbar from long range. Ryan Monahan, Alan Greene and Eoin Mannion all pointed to extend Galway’s winning margin in the closing stages.