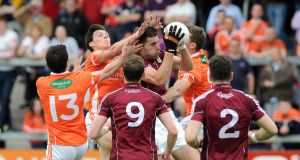 Galway will hope to have Fiontán Ó Curraoin back fit to feature at some stage in their 2018 season. Photograph: Inpho

Galway midfielder Fiontán Ó Curraoin will miss next year’s league campaign after breaking his leg during a club relegation match.

The rangy midfielder was lining out for Micheál Breathnachs against Connemara rivals Carraroe last Saturday. A two point defeat means his club will now face Kilconly this weekend in the Galway senior championship relegation final.

The 25 year-old teacher made his championship debut for Galway in 2011 against Meath - his first season out of the minor grade - and has made another 20 senior championship appearances since then.

“I had just kicked the ball away and the next thing I knew I was on the ground,” he explained to The Irish Times. “I could still see the flight of the ball, but then I knew something was wrong from how everyone around me was reacting.

“Thankfully the paramedics were at the grounds. I was lucky the match was played in Pearse Stadium and not back out in the club - the paramedics were straight on to the pitch, and I was brought straight into A&E. I was in a lot of pain that night and I had surgery on the Monday.

“I have to see the specialist on Friday, and hopefully I can get the cast off asap. I haven’t seen it yet, and with the cast it’s very awkward moving. I’m at home now and it’ll be six to eight weeks before I’m even back to work. I’m on a lot of medication for the pain, and I’ve a pin through my knee to my ankle.

“So yeah, small steps. Every step will be a tick. I’m told it’s around seven to nine months to be back playing, but I haven’t had the healing assessed yet so I’m not sure exactly yet. I’m hopeful I can come back from it soon.”

Ó Curraoin was midfield on the Galway Under-21 All-Ireland winning teams of both 2011 and 2013, captaining the latter. He was also a key member of DCU’s Sigerson Cup winning team in 2012.

“The Galway doctor has me well looked after, he was in the hospital before I arrived, and the physio, she was in there too. I’m in good hands,” says Ó Curraoin, who it’s understood sustained the injury following a late hit during what was an ill-tempered encounter.

“It is frustrating, I’m very disappointed to be missing out on the league and playing in Division One. It would’ve been a great experience but hopefully it’s just the start of that.”

Galway manager Kevin Walsh still hopes his high-fielding midfielder will be available by next summer’s championship. The Tribesmen won last year’s Division Two title - beating Kildare in the final with Ó Curraoin at number nine - and will play in the top tier in 2018 for the first time since 2011.

“We’re working hard with him and we will be,” explained Walsh. “It’ll take time to recover certainly. Our aim is to hopefully have him back towards the end of the league.”

Tianna Bartoletta: ‘After you’ve gotten your medal, you become black in America again’ 09:00
Matt Williams: World needs team sport more than ever in these tough times 07:00
Ian O’Riordan: An education in race and running during college days in America 07:00
Mature Ringrose keeping the ups and downs of rugby life in perspective 06:00
Pinatubo could light up Newmarket’s Guineas weekend 06:00
Crossword Get access to over 6,000 interactive crosswords