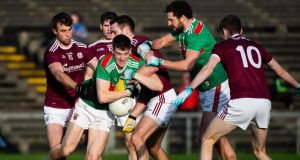 Penalties were needed for the second year running before a verdict could be reached between Mayo and Galway in this Connacht League semi-final match at in Castlebar on Sunday. Once again it went the way of Galway who won a dramatic penalty shootout 3-2.

Mayo, who led by six points at one stage in the second half, looked to be in the driving seat of a thrilling contest but in a second half, which needed 14 minutes of injury-time due to a head injury to Galway player Fiontán Ó Curraoin which neccessitated the midfielder being taken to Mayo University Hospital, substitute Paul Costello struck with the levelling point deep in injury time.

Extra time was ruled out in this year’s competition and it was straight to penalties with Galway producing the same result as last year in a game Mayo manager James Horan will be very disappointed to lose given their second-half performance.

Despite a second bite of the cherry after the referee ordered Gary Boylan’s penalty to be retaken, Galway goalkeeper Conor Gleeson saved for the second time.

Mayo looked to be heading to a final meeting with Roscommon when McLoughlin flicked the ball to the net after a great ball from Brian Reape for the first goal of the match as Mayo led by 1-17 to 0-14 with 12 minutes remaining. But Galway stormed back into this game, Adrian Varley finding the net and that late leveller from Costello forced the penalty shootout.

Mayo held a slender one-point lead at the break thanks to an injury-time free from Conor Loftus, who atoned for missing two very scoreable earlier efforts to give his side and 0-9 to 0-8 lead.

Galway’s grip at midfield was loosened somewhat when Diarmuid O’Connor was moved into deeper role and the Ballintubber man produced the pass which created Mayo’s best goal chance when he found Reape but his effort was blocked down by a Galway defender.

McLoughlin and Brian Walsh both scored a brace of points for Mayo but the biggest roar of the day from came a crowd of over 7, 000 came when Tom Parsons found the target.