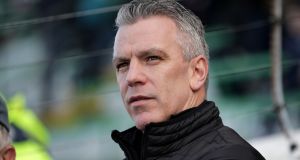 It’s still over seven weeks before Pádraic Joyce sends Galway out in the championship for the first time under his guidance but a promising Allianz League campaign has left him with a fair idea of what that team will look like.

Joyce’s maiden championship voyage will begin in the Bronx on the first Sunday in May when they take on New York and while the FBD Connacht League and the Allianz League have provided plenty of positives, that date at Gaelic Park has been firmly fixed in his mind since he took charge last October.

He has chopped and changed his side through the league but that has not curtailed their progress and two points from their remaining home fixtures against Mayo and Dublin should be enough to secure a place in the final.

Those two tests, starting next Sunday against arch rivals Mayo at Pearse Stadium, will provide further insight to what his championship team might look like.

“We are close enough to it, a championship team, we have it in our heads,” said Joyce. “You are always thinking and when the week is over you are picking a team at the end of the week, the best team that trained that week.

“We are carrying a panel or 44 or 45 with all the Corofin lads that are in there as well. We are trying to get game-time into them to give them their chance to play for Galway and seeing do they want to play for Galway? Can they survive playing for Galway, simple as that?

“They wouldn’t have got the chances over the years being so late involved with Paddy’s Day and they missed a lot of the league action. We are close enough. In the next two weeks we have to cut it down to 34. That will be a challenge and it will be difficult on some of the lads who have put in a lot of effort but that is the nature of the beast.”

Joyce guided the Galway under-20s to a Connacht title last year and has settled into the senior job with ease, playing an attacking brand of football which has yielded wins over Monaghan, Donegal, Tyrone and Meath, and a late loss away to Kerry.

Those displays have sent expectation levels in the county soaring and Joyce believes that the games against the reigning league and All-Ireland champions over the next two Sundays will give them a fair idea of where they stand.

“Two massive home games playing the two best teams that have been in the GAA the last six or seven years,” added Joyce, whose only injury concern is a hamstring problem which defender Liam Silke is struggling with.

“We are under no illusions it is going be two really hard games. Two great tests for our lads to see where we are exactly at. It will be good for us and we are looking forward to it.”

He’s not reading too much into Mayo’s form, with James Horan’s men in a relegation dogfight after picking up just three points from five matches.

“We could have been in the same spot as they are. We won two games by a point and lost by a point. The nature of the league, it is so, so tight. But in fairness to James Horan, the one thing about him, is he is introducing young blood all the time. He is building for the championship more than likely and next year. But he is giving game time to a lot of players.

“They have three points, they only need to get another three to keep them safe. They will come to Galway guns blazing. It won’t be a disaster if they get relegated but it won’t help. Even for ourselves here in Galway, we don’t get to play Mayo too often in these important big league matches. It’s normally championship. For the crowds and for the two counties it is great that the two of us are in Division One.”