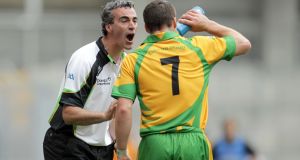 A former Donegal county chairman has spoken for the first time of his efforts to heal the rift between ex- manager Jim McGuinness and key player Kevin Cassidy in 2012.

P J McGowan was county chairman from 2010 to 2012 and was a close observer of McGuinness and his tenure which ended in a great All-Ireland triumph for Donegal in 2012.

However, in late 2011 McGuinness axed Cassidy from the squad in after the latter gave an interview to a best-selling book written by Fermanagh journalist Declan Bogue called This Is Our Year.

Reflecting on those momentous years, he revealed that he brokered a peace talk between McGuinness and Cassidy around Easter 2012 - a talk that lasted for two hours in an attempt to heal a major split between two of the county’s best known GAA personalities.

The team manager said Cassidy had broken a code of silence in his interview for the book while the latter has always insisted that he was only being complementary to his ex-manager.

McGuinness later refused to take part in the post-match press conference in Croke Park after Donegal had won the All-Ireland final in 2012 until Declan Bogue had left the room.

The split caused differences of opinion in the county that exists to this day, and both McGuinness and Cassidy were, and are, highly respected strong characters with deep convictions.

At its height, it was the Donegal GAA version of Saipan.

But now ex-chairman McGowan says he is breaking his eight-year silence to put on record his recollection of some of the background to that remarkable saga which came during his three years as chairman.

“I have never really said it in public before as it was not something that I would be broadcasting at the time, but a lot of time has elapsed.

“I took this decision to bring Jim and Kevin together off my own bat as county chairman, and the meeting came close to Kevin coming back but not close enough.

“I was sad that it was not resolved as the whole county was hoping Kevin Cassidy would come back and we all know his fantastic contribution to Donegal football.

“And as county chairman I felt I was in a good position to try and resolve it and show some leadership.

Part of McGowan’s decision to break his silence was also prompted by a newspaper report on the book This Is Our Year in the Gaelic Life and Donegal News last week, the paper which serialised part of the book originally.

The report spoke of McGuinness going to meet Cassidy in his school around Easter of 2012 in an effort to resolve their differences.

“I was reading that report where it was mentioned that Jim McGuinness went to Kevin Cassidy for a talk at Easter after the fall out over the book This Is Our Year.

“I actually brokered that meeting between the two men, and it took me quite a while to set it up, but we eventually got together around Easter 2012.

“That report may not have been aware of this, as this is the first time I have spoken publicly on the matter.

“It was not so much a case of Jim going to Kevin to get him back, I went to both of them and I got the two of them to meet and sadly nothing came off it and it is unfortunate that Kevin did not come back but obviously he had his reasons.

“I went to Jim and in fairness he agreed to the meeting after some hesitation and he came with an open mind.

“And we met, and the meeting lasted for about two hours and I was there with them and they had a good man to man conversation.

“They had aired their grievances on both sides and at the end of the two hours Jim did invite Kevin back to the panel. Kevin said he needed a couple of weeks to think about it as he was going off on holiday.

“But at the end of that period he said he would not be coming back and I am sure he had his own genuine reasons. It was a disappointment as the whole of the county was hoping that he would be back in the fold.

“Both were and are men with strong minds and very strong principles and the conversation between the two of them was very interesting and was in depth about different things and that is why it took about two hours.

“But they left after about two hours and it was sad that Kevin did not come back as he would have had something to offer that campaign. But I want to stress that I had and have the highest respect for both men and their achievements.

“My big regret is that the meeting was not successful. But I would also like to thank Jim McGuinness for his great contribution to Donegal football from 2010 to 2014.

“He put pride back in the county and was an inspiring leader who really brought the best out in his players and Donegal will never forget that contribution”.