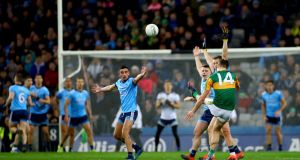 For a while there Eamonn Fitzmaurice was deep in what he calls a “beautiful insanity”, the place intercounty managers and obsessives need to go to be successful.

“When you get out you realise there are aspects of it that are insane and probably need to be insane if you’re trying to be competitive,” said the former Kerry manager. “So I’m not missing it, no.”

Yet in the same breath the man who guided the Kingdom to their last All-Ireland in 2014, eventually stepping down in 2018, won’t rule out returning to the position at some stage in the future.

It’s a bug, or a habit that needs feeding as he puts it, though unlike brother-in-law and current Wexford manager Paul Galvin, he won’t ever consider looking outside of Kerry for his fix.

“No, I wouldn’t manage any other county, ever,” he said. “Certainly I’d like to get involved with my own club again, but, no, to be honest, I would never see myself getting involved with another county. I couldn’t imagine what it would be like to face Kerry, so it wouldn’t appeal to me.”

All of which leaves Fitzmaurice as a mere mortal Kerry supporter right now, looking on as his successor Peter Keane attempts to develop a team capable of taking down Dublin.

The signs so far are relatively positive, with Keane’s Kerry drawing with Dublin twice, most recently last weekend, and beating them once on the four occasions they have met across 2019 and 2020.

Potentially Kerry also have a captain for the ages in David Clifford, who doesn’t look like he is going to be inhibited or burdened by the extra responsibility. His 1-3 haul, equalising point and all round five-star display at Croke Park last Saturday evening certainly suggested as much.

“He’s more than capable. I think the only factor against him is how young he is,” said Fitzmaurice of the 21-year-old’s new status as captain.

“His personality is very grounded, he is not going to get carried away, and if anything it might inspire him a bit more. He has had two amazing seasons, and it might give him a bit of an angle to keep trying to improve himself. So I don’t see it as a downside, to be honest.”

Fitzmaurice revealed that he privately thought about how Clifford might have got on if thrown in for his Championship debut against Mayo in 2017.

Just 18 at the time, Clifford scored 4-4 from play in that season’s All-Ireland minor final win over Derry, and, days out from the Kerry seniors’ semi-final replay against Mayo, hit 1-10 against Cavan.

That performance prompted Kerry great Jack O’Shea to state at the time that he personally felt Clifford was ready to play for the seniors though new rules precluded a minor from lining out for the seniors.

“It was no-brainer [in 2018], he was ready. It was even something I kind of thought about between the two Mayo games in 2017,” said Fitzmaurice.

“I felt at the time it would have been a panic manoeuvre, but I think you could have. And I still think he would have done something, but, no, the minute he started training with us he was ready, so it was a no-brainer when we did bring him in.”

On the captaincy issue Fitzmaurice favours a change to the tradition in Kerry where the county champions, currently East Kerry, get to nominate the skipper. It’s an issue that will be considered at Monday’s county board meeting.

“It is time to change it, there’s no doubt about it,” said Fitzmaurice. “Coming from having been involved when the county champions [selected the captain]....I think even by the end, and particularly for the Dr Crokes club, they won so many championships that the kind of romanticism had kind of gone out of it for them by the end.

“For East Kerry this year it was obviously a huge thing because they haven’t had a Kerry captain for 20 years. But I do think it’s time to change. Maybe two years ago they tried it but there wasn’t an appetite at that time. I think there is now. I’d be hopeful it would be changed.”