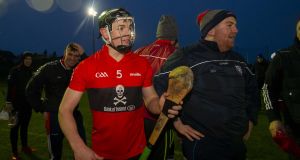 Reigning champions UCC needed a 65th-minute sideline cut from Mark Coleman to maintain the defence of their Fitzgibbon Cup and secure a place in the final against IT Carlow next Wednesday.

Hosts DCU looked likeliest winners when Wexford’s Rory O’Connor put them four points clear midway through the second half. Inspired by substitute Neil Montgomery, UCC drew level a minute from time, before Coleman drilled over the winner to seal the 0-18 to 0-17 victory.

The sides were level at 0-11 each at half-time, with Shane Conway and Rory O’Connor on song from placed balls, but DCU should have been well clear and they were punished at the death.

Meanwhile, in the other semi-final, IT Carlow’s hunt for a first Fitzgibbon Cup remains on course as Cathal Dunbar goaled in each half of their 5-14 to 0-15 win over Mary Immaculate College.

Despite Dunbar’s first goal Mary I led by 0-11 to 1-7 at the break with Cathal Bourke in form, but two goals in a second-half minute from Liam Blanchfield and Stephen Bergin turned the game in IT Carlow’s favour.

DJ Carey’s side maintained that lead to the end, while Dunbar and Chris Nolan added to the winning margin with added-time goals.

1 Germany well ahead of the curve as Bundesliga gears up for return to action
2 My favourite sporting moment: Roscommon minors restore pride to a county
3 Stephen Kenny: ‘I want people to come and look forward to watching this team’
4 America at Large: Hurling fan Dowling leading the fight against Covid-19
5 Seán Moran: Mayo's greatest football grievance actually goes back 95 years
Real news has value SUBSCRIBE