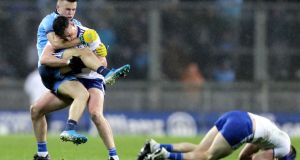 Another Saturday night in Croker, another last-kick draw. This time, Dublin were the equalisers rather than the equalised, Davy Byrne’s 79th-minute boomer into the Hill levelling a game in which they’d been miles off the pace for most of the night. Dublin’s neverbetability would survive a hurricane. In fact, it did.

Six points down going into injury-time and short a heap of their frontliners, there was no doubt which side went home feeling better about themselves. In the end, this was rank carelessness from Monaghan. Throughout a rotten evening’s weather they were much the better side and regardless of Séamus McEnaney’s desire to go sunny-side-up on it, this was undoubtedly a point lost.

“I thought it was a very good performance from Monaghan,” Banty said afterwards. “It’s a big performance to come here and play the five-time All-Ireland champions. They got a bit of a run on us in the second half, the goal was a crucial score. We’d be disappointed with that goal and listen, we’re disappointed we didn’t get the two points. But we’d be absolutely delighted with how Monaghan performed.”

All of which is fine and grand for public consumption but it’s bound to have been a quiet Monaghan bus that headed back up the road. They didn’t take enough chances when they were on top in the first half – 1-9 was only a middling return for 18 scoring chances. Even so, they still held a nine-point lead in the 60th minute, it should have been enough.

But a skittery Kevin McManamon goal beat Rory Beggan as the clock turned 70 and all of a sudden, Dublin had a sniff of a win. Seán Bugler was dead-eyed coming off the bench, stitching three smooth points in a frantic endgame. And when a Beggan 45 drifted wide in the 77th minute, Dublin’s one last attack ended with Byrne sending the Hill dotty.

Dessie Farrell will take heart from the never-beaten qualities his young side showed because in truth, the Dubs were outplayed in most other facets of the game. Monaghan burst out to an early lead but while they had the wind behind them, it could only account for so much.

The way both sides turned up in the first half in particular, there isn’t a weather system known to man that would have had Dublin close to parity. Farrell fielded only eight first-teamers against what was more or less Monaghan’s first XV and the gulf in experience was obvious. Monaghan attacked the first half like it was an opportunity, Dublin endured it like it was a trial.

“A very poor opening 35-odd minutes,” said Farrell. “Very different in the second half. So difficult to explain in isolation. Just very happy that we showed some sort of character, passion and desire to get ourselves back into it, and be somewhat more competitive than we were in the first half. But overall, just happy with how the second half went. The first half was not good.

“It’s difficult to analyse at this point in time. I’ll need to look at the tape, and go through it in greater detail. But at a superficial level, it seemed that we lacked the intensity that was required, slow out of the traps. They were going at it hard, and we struggled to compete basically. They overran us, and they were up for it and wanted it more. That showed on the scoreboard at half-time.”

Monaghan had a goal on the board inside 45 seconds. Ryan McAnespie, free-running and scheming throughout, speared a long pass outside Mick Fitzsimons to pick out Conor McManus in behind. McManus has had cleaner finishes in his life but they all count the same – this one bobbled inside Evan Comerford’s left-hand post and Monaghan were away.

They took the game over from there, reeling off the next seven points on the spin. Some of them owed a debt to the wind, certainly. McAnespie, Dessie Ward and Niall Kearns swung over one apiece that popped a sail and rode the breeze to the netting in front of the Hill. But Micheál Bannigan nipped in for a couple of sweet ones and McAnespie popped up with a mark that came on the back of some neat interplay out the field. It was clever, tidy stuff. By half-time, Monaghan had 1-9 to 0-3 lead to bring in with them and it should have been more.

There was always going to be a response but even when it came, Monaghan resisted it reasonably well. Ciarán Kilkenny burst into the game, Dean Rock carried the fight and the lead was cut to six inside the opening 10 minutes of the second period. But Monaghan found their own response, the highlight of which was a ridiculous Beggan free from the Dublin 65 into the wind.

They ticked and tocked away, looking for all the world like they would see it out. Conor Boyle lorried forward for a brilliant score, McManus nailed a couple of frees and by the time the fourth official was reaching for the board to announce an extra six minutes, they still led by six, 1-15 to 0-12.

But then the Dubs came. They always do.