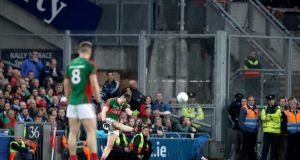 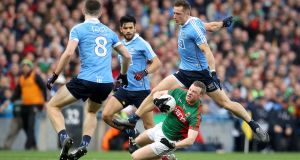 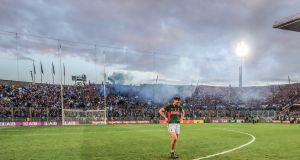 Mayo’s Aidan O’Shea walks away from Hill 16 after the game. Photo: James Crombie/Inpho

Contributed enough to be an All-Ireland winner. What a curse it is. Enormous credit for the early man marking job he did on Paddy Andrews while his second point fell from the heavens

Showed up when Mayo needed a leader to drive them forward but Dean Rock had the better of him and landed two in the opening six minutes. It could have been 1-1 but Higgins recovered like he always does.

What a talent. Bettered the silencing of Bernard Brogan in the draw by minding Paul Mannion and there was the pick-pocketing of Kevin McManamon at the moment that a goal would have seen a five point chasm opened between the sides.

Blacked carded just before half-time, it’s an unfair place where Mayo footballers exist. Was doing more than keeping tabs on Connolly, who could have been black carded for an earlier incident Maurice Deegan missed, turning his bitter rival into a defender and plundering a magnificent goal.

Absolute warrior for 71 minutes, mixing with any Dub who would have him, combining man marking duties on Kevin McManamon and a ball carrying threat through midfield.

Took over Diarmuid Connolly duties after Keegan walked and was unable to return for the second half after taking heavy punishment including a horrendous dunt when running at the aforementioned man of steel.

Strange to see the eldest O’Shea brother play to the death but he was inspirational during Mayo’s third quarter refusal to wilt. There is a season or two left in those legs yet.

Lacked the pace to beat James McCarthy to a loose ball with a five metre head start. But his one gear did himself or Mayo no shame at all.

Kicked a nice score to ignite Mayo’s second half assault but was lucky to avoid a card of some hue for some wild behaviour in the vicious period of this match. Needed to score more than 0-1, didn’t.

Prototype of the modern footballer. Covered miles of grass switching from sweeper to chief raider, kicking a point on 53 minutes that was vital to stem the leakage following Connolly’s penalty.

Replaced by Alan Dillon on the hour. Didn’t shirk the violent patches and could have been sanctioned but he worked as hard as any man on the field. Problem is Mayo needed a score or two from him to prevail.

Last Mayo man to leave the pitch. Pulled this magnificent, lonely furrow season from a deep well of footballing excellence but that may be it for the 32 year old. Great point after sending Cian O’Sullivan one way then the other.

Not enough. Not from a man of his power, his natural footballing talent. Did glide so cleverly in front of O’Sullivan to set up Lee Keegan's goal but at the end the Dublin defenders swallowed him whole on square’s edge.

On his shoulders Mayo were carried. Ten shots at the posts, nine made it through, the last one faded away. A great footballer but that greatness comes as much from his resilience and desire to win as talent.

Conor O’Shea did well but Alan Dillon couldn’t roll back the years while Barry Moran, possibly, and David Clarke, certainly, should have started. Dublin’s replacements won them the game.