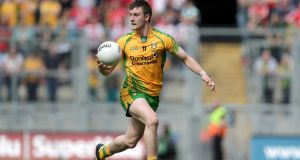 Leo McLoone has become the latest of Donegal’s 2012 All-Ireland winners to retire from inter-county football.

McLoone played over 100 times for Donegal since making his debut in 2008.

The 30-year-old Naomh Conaill man won five Ulster SFCs and was an All-Ireland winner in 2012.

“He was a real leader in the group and he’s a big, big loss,” Donegal manager Declan Bonner said.

“Leo has been a brilliant servant to Donegal football and the time we’ve been involved he won two more Ulster titles and was a very important part of the panel.

“He was a really, strong, powerful player who could play in a number of positions.”

McLoone was given his Donegal debut in 2008 by Brian McIver and his first championship appearance came under John Joe Doherty’s management in 2009.

McLoone has stepped away after winning the Donegal SFC with his club last year. Naomh Conaill went on to reach the Ulster final, losing to Kilcoo.

Bonner said: “I met him a number of times in early autumn and he was going to see out the club championship with Naomh Conaill. He had a lot of experience and was a born leader but felt the time was right. He’s been there a long time and worked hard the last few years.”

Donegal were set to receive a boost last night with Patrick McBrearty expected to be back in training.

McBrearty has been in America for a couple of months, but returned back to Ireland in recent days and was expected at Convoy on Tuesday night.