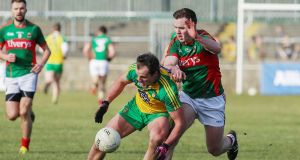 One of those dream days that the league conjures up every so often: a fast and furious game on an afternoon of pure February sunshine featuring two counties between who no love is lost. 11,000 happy customers forgot about the future of the country for the afternoon as two of the brand leaders of the west of Ireland game went toe-to-toe.

It had everything: wonderful point scoring all over the joint, precise and strong defending, a torrent of yellow cards (10, seven for Tir Conaill), a coolly converted penalty by Mayo’s Diarmuid O’Connor and a vintage counter-attacking Donegal goal featuring stars of the old firm: Christy Toye and Rory Kavanagh and , finally, Leo McLoone, whose goal touch belongs to the Bergkamp school of cold-bloodedness.

Mayo went hell for leather for a road win here and built a 1-10 to 0-10 lead after 50 minutes when Conor Loftus capitalised on fierce concerted pressure on Donegal by landing a true heavyweight point. This was the critical moment. Minutes earlier, Rory Gallagher had sent in Neil Gallagher to police what was a stormy mood around the middle of the field only to see the Glenswilly man return to the dug-out, awarded a black card with his first involvement.

“I think he had the ball,” the Donegal manager recalled. “I personally thought there might have been a foul on him but he did seem to trip the man and that was the black card. But I thought even before the penalty we were the better team in the second half. Mayo dominated in both kick outs in the first half and I thought we improved on both. So having been destroyed in the kick outs it was good to go in only a point down at half-time.”

It was true: Mayo had mined a lot of possession for their 0-8 to 0-7 lead at the break. But the defensive sharpness was high on both sides. Both Gallagher and Stephen Rochford mixed it up from the beginning. Two of the most accomplished defenders in the game - Mayo’s Keith Higgins and Donegal’s Frank McGlynn - were given an attacking detail here. McGlynn couldn’t find the same space as he had enjoyed against Cork but Higgins was a tantalising presence, attacking space and acting as playmaker, linking up with Aidan O’Shea for a terrific show-and-go point in the seventh minute.

It was a shame that injury forced the Ballyhaunis man to retire on 20 minutes as he was beginning to warm to the day. There was a reassuringly solid look about Mayo early on. The speed with which they worked the ball out of their half, usually with two or three crisp passes, meant that Donegal defenders were constantly putting out fires. In addition, the home team afforded Shane Nally a mystifying degree of latitude along their right flank, which he was happy to exploit, curling a fine point on 15 minutes and setting up corner back Brendan Harrison to give that one point lead at the break.

For Donegal, Ryan McHugh was, once more, splendour personified. The Kilcar man is a joy to watch and his cousin Eoin brings the same qualities of speed and inventiveness to the Donegal game. The introduction of Anthony Thompson in the second half also paid dividends: the Glenties man plays the game at his own sweet rhythm - that chop on the upbeat - and seems to be everywhere all at once.

Michael Murphy was his usual self: a colossal presence, executioner from long range and scorer of an absurdly difficult 62nd-minute point for good measure. Mayo played Aidan O’Shea on the square in the second half and while one long ball almost brought a repeat of last summer’s famous goal, they didn’t involve the Breaffy man as much as they should have. The visitors challenge faded: just two scores after Loftus’s statement of intent.

“You are looking at a team that is very capable of smothering that kind of threat,” said Rochford.

“We didn’t get the kind of ball we needed inside and we didn’t make it stick. It was a good game but I’m sorry to say this: we have to move beyond good games and performances and look to get two points and that will be the stretch on us when we go to Clones.”

Just what you need after three league losses is a trip to Monaghan just when the Farney army are feeling it. Mayo are slowly gathering the troops but it may take a while before we hear their battle cry.