Donaghy says players are ‘screaming out for change’ 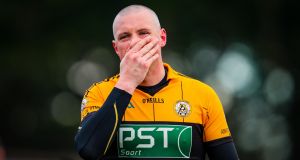 Kieran Donaghy believes GAA players are “screaming out for change” and for a structured season, yet the Kerry great equally admits he probably wouldn’t report his own county for breaching closed-season regulations.

His comments neatly sum up both the problems facing inter-county players as well as the difficulty in implementing potential solutions.

A Gaelic Players Association (GPA) motion to create a “confidential disclosure platform” for players to report breaches of the closed-season training ban received 96 per cent support at Wednesday evening’s agm.

Yet while Donaghy can fully understand the reasoning for it – 40 percent of inter-county players claimed in a 2018 ESRI report that they have no off-season – the four-time All-Ireland winner isn’t sure if he would go so far as to report his own manager, even in a confidential setting.

“I don’t think so,” said Donaghy after some hesitation. “Look, I really don’t know. I don’t see myself [reporting Kerry] but that is all right for me to say, I have been in a county set-up for 15 years so I don’t see myself doing it. It is fine to say it is confidential but look, you would be terrified in case anything came out. I don’t know. I can’t answer that. I won’t be in that position, thanks be to God.”

What’s certain for Donaghy is that something has to be done to improve the lot of both club and county players.

Speaking at the launch of the EBS-supported 2020 Federation of Irish Sport Volunteers in Sport Awards, the powerful forward, who was in club championship action for Austin Stacks last weekend, said things have reached breaking point.

“But Jesus, for the overall enjoyment of everybody that’s playing the game . . . like, can we see fellas like Cluxton and Tomás Ó Sé playing 15, 16, 20 years? In the current regime it is difficult enough to see that a guy will go that long in the current format because you basically can’t do much else with your life.

“You will certainly find it very difficult to be working and taking a promotion at work, to start a family at around 30 and continue to do the training you are supposed to do.

“With the timing of the seasons now, it is very difficult to do all that. The whole thing about people reporting on their own county is obviously going to be a tricky one and if people do it they will do it for their own prerogative. If they don’t, they will be choosing to maybe protect their county side as well, so it is very difficult to see what the right thing to do is.”

Former Player of the Year Donaghy retired from Kerry after 2018 and felt his club career with Austin Stacks was over too after last November’s Munster club SFC hammering by Nemo Rangers.

“I let myself down by not performing and I thought the writing was on the wall for me,” said Donaghy, who revealed his weight rose to 17½ stone during the Covid lockdown. “I said, ‘If I can’t shake this weight then I don’t have it in me to play.’ I was 15 stone 10 pounds on the scales last Saturday for the game against Dingle.”

Donaghy scored an early goal in that game too as Austin Stacks surged clear only to be pegged back to a draw in the club championship opener.

“The score Paul Geaney got for Dingle to draw the game in the last minute was as good as you’ll see around, he got an unbelievably difficult ball and turned and banged it over from 30 or 40 yards,” said Donaghy. “It was a belter of a game.”

On the cap of 200 at games, Donaghy feels it’s “very strict” and is tough on club officials in particular.

“We had three or four debutants the last day, their parents want to go and their brothers and sisters want to go,” said Donaghy. “We had a young lad, David Fitzmaurice, playing his first championship game at wing-forward, you want his family to be able to get in and see that game. So it’s a difficult one but I think we can up it. I think if we can up it even to 400 or 500 people it would take huge pressure off clubs for who gets tickets.”