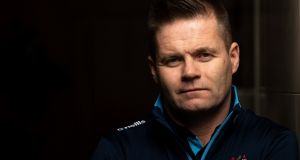 Dessie Farrell: “This thing stimulates me, it challenged me. I love football, working with footballers.” Photograph: Ramsey Cardy/Sportsfile

Anyone wandering around the financial hub near the Sam Beckett Bridge on Friday morning might have caught sight of arguably the bravest man in Dublin. Dessie Farrell didn’t blink when he fielded what was the essential question of his first press conference as Dublin manager. “Is this the easiest or the hardest job in intercounty football?”

“It depends on your own perspective,” he replied evenly.

And he’s right; you could have hauled the priciest barristers out of the Four Courts to argue both sides of that coin and finish none the wiser. Yes, Farrell is inheriting, on all evidence, the strongest and deepest county panel in Ireland.

He’s taking charge of a group that has apparently forgotten how to lose. You have to go back to the high point of the Obama administration to locate Dublin’s last championship defeat, in August of 2014.

Jim Gavin spent six years in charge of Dublin but it felt longer than that. Against all that, empires crumble. It’s a risk because the expectation has never been higher.

“It is, of course,” Farrell said when he sat down in down in a board room in the offices of AIG, Dublin’s main sponsor. “ We’ve been spoilt in Dublin as supporters and I’ve been a supporter myself the last number of years. It has been unprecedented.

“It definitely was something to consider. Ultimately, at the end of the day, I’ve always taken the approach that, there’s two ways to live your life maybe. One, as a timid soul, sort of year by year, month by month, week by week, possibly even hour by hour, as a timid soul.

“Or the other is to perhaps do the things that frighten you at times. This thing stimulates me, it challenged me. I love football, working with footballers. Ultimately, now is the time, if I didn’t do it now it would probably never come around again.”

Even though everyone knew that Gavin had “gone” it was still half a surprise to turn up at a Dublin media event and not find him sitting there, consulting his wrist watch periodically, opening a water bottle just so and speaking in perfectly modulated tones in a room of perfectly regulated temperature.

Now that job belongs to another of the smart lads of 1995. Farrell is no stranger to management or to the core bulk of the Dublin squad having managed them at underage level. But still. Sport is cluttered with examples of teams who failed to fire after the departure of a figurehead.

Gavin was an elusive example of the type, guiding Dublin through six years of relentless and shape-shifting success without any memorable public orations or outbursts. Control and the ethos of the group became the mantra.

The first task for Farrell is to ease Dublin into their defence of the All-Ireland while beginning to reshape the team in his own vision. But he doesn’t have any immediate structured idea as to a ratio of fresh faces against familiar names.

“Obviously we’ve had a couple of trial games and the O’Byrne Cup tomorrow, and if there’s another game, and we’ll continue to monitor players. But I think the squad does need an injection of new faces and new blood. To what extent, I’m not sure. In the initial period of time anyway, that won’t be to the detriment of anyone else.”

He’s already sat down with Jim Gavin. You imagine a brisk morning meeting: coffee and a handover of files. But you hope it might have been over a drink because it’s hard to know what Gavin might have told Farrell that he doesn’t already know.

Both men know the patterns and challenges of the city game like they know the street on which they grew up. They’ve breathed it for decades. Both came through in the same era and both know too well the city’s weakness for uproarious optimism and crushing disappointment. Evenness of emotion – a kind of coldness – became Dublin’s calling card over their last five unbeaten All-Ireland seasons. Like his predecessor, Farrell talks in a low measured way and he won’t get overexcited.

What makes Farrell’s task so difficult is that anything less than a continuation of that winning streak will be regarded, rightly or wrongly, as a failure.

“Well look, that’s the nature of sport,” he acknowledged. “There’s always going to be challenging times. I think in my first year as Dublin minor manager, we got to an All-Ireland final, got beaten in that, won it the second year. So the lesson I take from that is failure? – you can learn a lot from it for sure.

“And one of the challenges with this group is that they’ve been so successful, they haven’t had to endure or encounter that. Success can be a lousy teacher, and there’s an onus on us to be very, very vigilant around how we set ourselves up for the season ahead.”

Vigilant. The season ahead. So far, so familiar. The journey starts in Longford town, the journey never ends.