After classic semi-final, it is not yet clear whether Kerry manager is less likely to leave 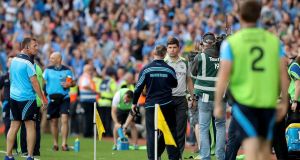 Such are the cruel and at times unbearably high expectations of Kerry football that even after one of their finest performances of recent times a large question mark hangs over the future of their manager: in this case, Éamonn Fitzmaurice.

Indeed there already was an expectation that, win or lose to Dublin last Sunday, 2016 would mark the end of his four-year term. It’s just not clear yet if the two-point loss, as close as it was, will reinforce or else somehow reduce that expectation.

Last October, when only agreeing – or else asking – for a one-year extension to his term, Fitzmaurice himself hadn’t looked past Sunday’s game. That term has now expired, and the asking or agreeing may not even be his decision any more.

The question of his successor has also been raised already: Jack O’Connor, who stepped down in 2012 and was replaced by Fitzmaurice, would appear the most natural, given that he has since delivered two All-Ireland minor titles, while currently in charge of the Kerry under-21s. It may be, however, that O’Connor would rather sit tight for another year or two.

Fitzmaurice did shake up his backroom team last October, in the wake of the 2015 final defeat to Dublin. Trainer and selector Cian O’Neill departed to take over as manager of Kildare, while three-time All-Ireland winner Liam Hassett came on board as a selector alongside Mikey Sheehy and Diarmuid Murphy, with Padraig Corcoran from Dingle also coming on board as the new trainer/selector.

It does, however, appear unlikely that a successor will come from within that backroom, given the lack of any individual managerial experience.

Even by Kerry’s own high standards, Fitzmaurice’s record over the past four seasons certainly isn’t bad. In the All-Ireland championship series, Kerry under Fitzmaurice have played 11 games, won eight and lost three – the problem being all three have been to Dublin (the 2013 All-Ireland semi-final, the 2015 final, and now the 2016 semi-final).

Again, those three defeats are the only championship games Fitzmaurice has lost as Kerry manager, meaning his summer has always ended either losing to Dublin or winning the All-Ireland.

Former Kerry team-mate Dara Ó Cinnéide, told this newspaper before Sunday’s final: “For what’s been available to Fitzmaurice over the past four years, he is absolutely getting the maximum out of them. The dynamic has changed now, four years later. We’ve had a couple of All-Ireland minor winning teams that will hopefully provide players over the coming years.”

With the expected retirements of Aidan O’Mahony (36), Marc Ó Sé (36) and Kieran Donaghy (33), the future of Kerry football may already be coming up from behind, which for Fitzmaurice may simply mean it’s time to step out of the way.

1 Eamon O’Shea: ‘We spent quite a bit of time talking about older people rather than to older people’
2 Love tears them apart in stunning Epsom Oaks romp
3 Monica Seles: The warrior queen who could have been the best ever
4 Sport crosses its fingers yet again as ministerial merry-go-round gets another spin
5 Valterri Bottas pips Lewis Hamilton to pole in Austria
Real news has value SUBSCRIBE

Love tears them apart in stunning Epsom Oaks romp 16:33
Valterri Bottas pips Lewis Hamilton to pole in Austria 15:43
Chris Martin steals a point for resurgent Derby against Forest 15:23
Brighton see off doomed Norwich to edge closer to survival 15:09
Eamon O’Shea: ‘We spent quite a bit of time talking about older people rather than to older people’ 08:00
Crossword Get access to over 6,000 interactive crosswords