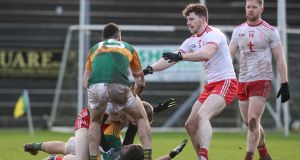 Tyrone’s Ben McDonnell and David Clifford of Kerry scuffle on the ground during the Allianz Football League Division One clash in Edendork. Photo: Bryan Keane/Inpho

If you ever go to Edendork remember to bring a map. A paper one. And a pencil, in case you end up taking notes on wet paper in the howling wind and the stinging rain.

When this game was quickly mobilised out of Omagh during Storm Ciara on Sunday morning in search of a playable venue, those of us already on route could only find Edendork loosely mapped somewhere beyond Dungannon, possibly because it’s no longer in Europe, although as it turned out closer to Dublin than Omagh, only still a long way from Portmagee.

When the Kerry team bus found the place any look of loss appeared offset by the relief that Edendork did exist, and the game was definitely going ahead. They’d driven up on Saturday and this would have been a long road back from nowhere at all.

Most of the Tyrone players know this place intimately, especially forward Darren McCurry, who learned his club trade right here and as it happened played a starring role in the one-point victory, scoring an excellent 0-6 in all, five in the second half, including one gem from a sideline ball which no doubt impressed Kerry selector Maurice Fitzgerald.

That above wind and rain was a natural factor, in the backs of Tyrone in the second half and clearly helping them over-turn a four-point deficit at the break to hang on by the minimum. Neighbours may be defined by distance, but no distance can keep these two rivals far apart.

Kerry’s quest to reduce that minimum back to zero – and they came close – clearly wasn’t helped by losing forward and captain David Clifford for the last 12 minutes of the game (including injury time), by then their joint-top scorer with 0-6. Already booked late in the first half, Clifford saw his second yellow card on 66 minutes, this time after being grabbed in a headlock by Tyrone replacement Ben McDonnell: Clifford immediately raised his arms in innocence, only referee Fergal Kelly somehow felt compelled to book them both, which he did. That reduced the match to 14 players each after Kelly had earlier on in the half shown Peter Harte a second yellow and a red.

“Is that your read of it?” asked Kerry manager Peter Keane afterwards on the Clifford incident, a man known to best answer a question with a question. “That would be my read of it too. It’s easy-pickings (for the referee) to say there are two fellas involved, ‘I’ll give them two yellows’, but because he’d picked one up in the first half, two yellows make a red.

“But sure whether it’s this year or last year or the year before he’s a good player, so of course he’s going to be marked. And I did think we might squeeze something out of it, even a draw. It was tight last weekend, tight again here, but we’re fighting, they never said die. Was four points up at half-time enough? It’s hard to know, because conditions did seem to ease up a little in the second half, the rain eased up anyway.”

Tyrone manager Mickey Harte was smiling on both sides of his face, certainly happy with containing Kerry to four points in the first half, perhaps more so that Cathal McShane was one of the players to help Tyrone claw it back in the second. Given the conditions, McShane may still have had some visions of Adelaide and that sunny chance of a pro career in the AFL, but with his mind made up to stay at home he’s sure to remain the keystone of the Tyrone attack this summer.

“We can smile now, but smiles only last a day in this competition,” said Harte. “We weren’t smiling in Monaghan last week, and every point had to be fought for, as you could see out there. That won’t keep us in division one either, but the fact they went and followed through on what they asked of themselves this week, that’s always comforting to know.

“Everybody here will know the conditions were very difficult, especially underfoot, but credit to Edendork to get it as good as it was. I do believe we won the game in the first half, holding them to four points at half-time, was critical. They could easily have gone seven, eight, nine clear, and that would have been very difficult to make back.

“But we had to grab it back as quickly as possible, so three points without reply were critical, and took a lot of skill, a lot of nerve. The breeze helps you get the ball in, but you have to keep possession. Kerry being Kerry they were always going to bite, but we just managed to hold on.”

Indeed Kerry were always likely to need more than 0-8 in the first half, and definitely more than 0-5 in the second, Sean O’Shea also finishing with 0-6, Micheal Burns their only other scorer on the day. Paul Geaney did have one clear-cut goal chance in first half too, only for that to be saved by the boot of Niall Morgan.

Morgan also converted three Tyrone frees in the first half, the other free coming from McCurry, and once they had the wind in their backs they quickly found their range from play too – hitting four without reply with 10 minutes of the restart to level it up. McShane was introduced on 40 minutes, those who had braved the elements of Edendork showing their appreciation.

“We were all delighted, he’s a super player, a physical player,” said Harte. “I always said as long as he hadn’t signed anything, he was never gone. I don’t want to get into a political row with another football association, but there is no payback to us from the AFL, it’s a win-win for them, so I don’t know what we would create a market for that drain.”

Keane had one more question before heading back the road with Kerry. “A win, a draw, and a loss, three points out of a possible six.  It’s a bit of a lucky bag. isn’t it?”