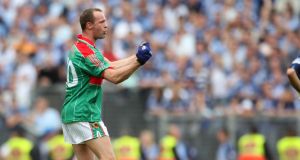 David Brady calls and asks if you can give him a minute and hangs up, all in the space of eight seconds. “Sorry now, I was absolutely bursting for the toilet,” he says when he rings back. “That was a 35-minute phonecall I was on and the toilet was beckoning after 20.” The obvious question to ask is why not get the job done before the first call but this is David Brady we’re talking to. Some level of pinballing illogic is generally baked in.

In dark, black times, Brady is doing a small, decent thing. On Saturday afternoon, he got a Twitter message from a stranger taking a long shot. The chap’s name was Kevin and he told Brady that his 62-year-old father was a Mayoman living in Wicklow, self-isolating like a good citizen and not, in all honesty, doing great with it. If there was any chance, could spare a few minutes to give him a call? There was and he did.

“I said, ‘Tom, you don’t know me but I hear you’re mad into Mayo GAA.’ He said, ‘I am.’ And I said, ‘My name is David Brady, I played with Mayo for 15 years and if you had a minute, I’d love to talk football with you.’ His first response was to say, ‘Is this a skit? Who is this?’ But once I convinced him, we were away.

“We had a lovely conversation. It was about Mayo, yes. But it was about life too and how he became a farmer. He was walking a byroad one day and he met a fella with a load of heifers and he ended up buying six off him, even though he had no field. He ended up buying a farm after that and it became his life. At the time I rang him, he was herding two heifers. ‘They’re my last two,’ he said. ‘And the TB test is tomorrow.’

“And at one stage he said, ‘You’re into the cancer yourself.’ Because he’d seen the Laochra Gael programme. It transpired then that his wife had died of it 15 years ago and we talked about how hard that was on him. But it was an absolutely lovely conversation. ‘I’m narky enough at times,’ he said, ‘but my two grandkids, they have me softened.’”

When they finished up, Brady found himself so lifted by the chat that he went on Twitter looking for more. “Had such a lovely conversation today with GAA Tom who was out herding Heifers. He’s self isolating, originally from Swinford now living in Wicklow. If you have a Mayo GAA mad mother, father or heifer DM me info & I will call them for the chat over the next 3 weeks #GoodToTalkGAA.”

That was at seven o’clock on Saturday evening. By lunchtime on Monday, he was up to 20 phonecalls. On top of which, the pebble dropped in the pond was rippling out. Alan Brogan saw his post and joined in. “Lovely idea DB,” Brogan replied on Saturday night. “Anybody with Dublin, Mayo or parents anywhere who are cocooning and would like a chat about GAA .. send me a message and I’ll call them over the next 3 weeks.”

Twitter can be such a grotty hellhole at times but this one goes in the credit side of the ledger. The power of a phonecall to change a lonely day, the happy rattle of a bit of football talk. So simple. Such a genuine, nice thing to do.

“Ah no look, it’s not nice of me,” says Brady. That’s not what it is. I’m coming off calls and it’s giving me more of a lift than I’m giving anyone. All I’m doing is listening. I have talked to people all over the world in the last 24 hours. In North Carolina and Newcastle and New York.

“The last one there when you were ringing me was a fella in Dublin who’s from Westport and he’s self-isolating in a bedsit that he’s moved into because his sons are involved in healthcare and his wife is a catering worker in Beaumont. We talked for 35 minutes about football and what it has meant to him as a Mayoman living in Dublin all this time. I’m sitting back listening to these people’s stories and feeling so lucky.

“Yesterday I was talking to a man from Charlestown and he was talking about how much Mayo football meant to them down the years. His daughter married a Roscommon man and when they were about to have their first son, she moved back to Mayo because she wouldn’t have the child being born in Roscommon. Sure how could you not love that?”