David Brady: I'd like to see an official line from Croke Park

Former Mayo midfielder asks would a team with a positive test have to be pulled from competition? 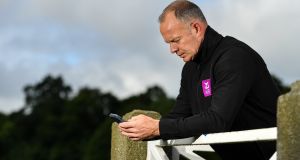 David Brady: “I don’t think we can take any chances. And I wouldn’t bat an eyelid if it was my county, or any other county, that is deemed a threat.” Photograph: Seb Daly/Sportsfile

Definitely, probably – not maybe. David Brady hardly conceals his concern as he looks across the current GAA landscape, the club championship back underway, the inter-county game loudly calling, the strictly limited number of spectators and the obvious need for more.

Because somewhere in there is a Covid-19 case waiting to happen, and if and when it does, Brady believes the only option would be to pull that team – even if it happens to be his native Mayo.

“Definitely, probably,” says Brady, when asked about the chances of either of those competitions being interrupted in the coming months.

“So I would like to see guidelines, an official line from Croke Park, on when that is the case, if there is a potential Covid-19 case within the team. Once the inter-county championship starts it is game after game, week after week.

“The signs and symptoms don’t appear in the first week, and yet that’s when it’s most spreadable. So I don’t think we can take any chances. And I wouldn’t bat an eyelid if it was my county, or any other county, that is deemed a threat.

“And not to the other team, but to their own team. Because that close proximity of someone having Covid-19, in a club team or an inter-county team, I don’t think there is any place for that team in a championship. And again for the safety of their own team-mates, more than the teams they’re going to be playing. Especially as the team-mates go home to their family.”

Brady doesn’t say this lightly; he knows full well the lasting impact of any club success, including his own club Ballina Stephenites winning the All-Ireland championship back in 2005, Brady finally winning an All-Ireland final after losing another eight, between club and county.

Indeed Brady recalls a special memory of that homecoming night, when among those to greet the team as they entered Ballina was Jack Charlton, the late Republic of Ireland manager.

“I do remember, looking out, and there was himself, Jack, standing at 6ft 6in, he stood out, waving the flag, welcoming us home, as All-Ireland club champions. He welcomed us home, because he felt part of our community in Ballina, and he was a part of it. That’s why it was so nice to see the mural painted on the wall next to the rich pool, more because of his love for fishing there.”

At the height of the Covid-19 lockdown, Brady saw the impact the GAA could have in more subtle ways, when he responded to a Twitter message from a stranger named Kevin, who told Brady his 62-year-old father was a Mayoman living in Wicklow, self-isolating, and was there was any chance, he could spare a few minutes to give him a call?

There was and he did, and the idea took off – and also the subject of Episode Two of AIB’s The Toughest Summer, a documentary which tells the story of Summer 2020 which saw an unprecedented halt to Gaelic Games.

With the Mayo club championship beginning in earnest this weekend – including Charlestown against Castlebar Mitchels, reigning county champions Ballintubber against Aghamore, and Breaffy against Westport – Brady also sees the need to increase the current limit on spectators to more than 200.

As of now that 200 is set to more than double to 500 on August 10th with the commencement of phase four, originally scheduled for last Monday week, July 13th, before the decision to pause left that upper limit as it was. However there is still no guarantee there won’t be another ‘pause’.

“We need to be careful what we wish, “ he says. “I suppose the whole premise of our summer was waiting for the day, when the GAA returned. People were crying out for it, we’ve got it now, but not as we know it.

“The 200 capacity, I have an opinion on it, but I don’t think it really counts, because at the end of the day we’ve got to be led by the people in authority. But 200 is very little, and we’ve all seen the pictures, there aren’t any hats, scarves or headbands being sold outside the grounds. Maybe cherry-pickers for hire. So I think it does need to be reviewed, and there’s no reason it can’t be extended to 400. Which is still not enough, but of course it’s safe.”

In the meantime, Brady also believes temperature checks should be made mandatory at all club games.

“The further the championship goes on, into the winter season, the more we need to be very careful about the amount, the responsibility, which is why temperature checks should be made mandatory. You can’t hide a temperature, if that’s there, it’s one of the key indicators. That should be checked, before every single time they train or play.

“But if say Mayo are playing Galway, and if one player did have signs or symptoms, I couldn’t in any shape or form see how that team could compete. And that throws the whole schedule out of sync, and that team is no longer in the championship. Once in you’re in the same training session, you’re in close contact.”

1 Ken Early: PSG would be sensible final move for Ronaldo
2 A new breed of superstar - Collin Morikawa wins US PGA
3 The Offload: Joe Schmidt the influencer is due a second act
4 Ronnie O’Sullivan: snooker’s next generation are ‘so bad’
5 Champions League quarter-finals: game by game verdicts
Real news has value SUBSCRIBE