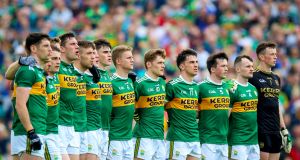 Plays outfield with his club so he’s learning as he goes with Kerry. A confident young man, he’ll need every bit of it here. Must stay cool and not get rattled. @Shane_r14

Has electric pace but his judgment and positional sense are weaknesses. Still developing as a player and has been willing to take on big jobs in each game so far.

A tough player who has been handed tough tasks. The most physical of the Kerry backs, he’s been consistent this year. I can see him taking on Con O’Callaghan. @tadhgmorley

Kerry’s go-to man-marker in recent games, covering Peter Harte and Jamie Brennan. Goes into the game on a high after those performances.

Kerry’s most consistent defender over a number of years but hasn’t had his best summer. Got a bit lost as a sweeper against Tyrone, exposing the full-back line. @P_Murphy91

Hasn’t done too badly in his first extended run in the team. Brings a good level of athleticism and physicality, and he could take up Ciarán Kilkenny. @GavinCrowley9

A natural wing-back. Played well against Meath and Tyrone. Has a habit of going into the tackle with the ball - okay at club level but he can’t do that against the Dubs. @brianbegley1

Kerry’s most important player, considering what it would mean if he came out on top over Fenton. On his day, he can outplay any midfielder. This has to be one of those days. @D1Moran

Very good against Mayo but his level dropped against Meath and he hasn’t reached the heights since. Powerful enough to play effectively on Michael Darragh Macauley. @adrian_spillane

A wing-back picked at wing-forward, giving Kerry flexibility if they want to bring on a forward later in the game. Quick, strong, dogged and a fine tackler.

A class player and will only get better. Great comfort to the rest of the team because he so rarely misses a free. Could do more from general play but a big plus for Kerry. @Seanieos

Kerry’s best player this summer. Experienced, elusive and very strong mentally. Has the direct running to make the Dubs worry about him rather than the other way around. @Stephenob15

Exceptional player when Kerry have possession but I would worry about his work-rate against the Dubs. Needs to do more to defend from the front and turn the ball over. @davidcliff13

Has come back to form through the season. Ruthless at the top of the D, as he showed against Donegal. Goals happen around him and Kerry will need them. @Geaney15

Has all the skills and is a beautiful kicker of the ball. But as with Clifford, Kerry are going to need more from him in terms of work-rate and tackling. @KSpillane96

Other players used this Championship

Stephen Kenny vowing to do things his own way, an Ulster final like no other 08:14
Ireland boss Stephen Kenny: ‘I’ll do things my own way. Put it that way’ 06:00
Mickey Graham calls for some clarity from GAA on championship plans 08:24
Whole new ball game: Hats, scarves, facemasks - An Ulster final like no other 06:00
Damian Browne: To the ends of the Earth in search of the ‘savage warrior spirit’ 06:00
Crossword Get access to over 6,000 interactive crosswords