Kerry legend picks nine Dublin players, only one from Tyrone and none from Galway 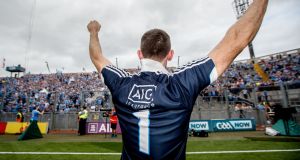 Dublin’s goalkeeper Stephen Cluxton should be picking up another All Star after a fine season. Photograph: Inpho

1. Stephen Cluxton (Dublin) Still the best around. Rory Beggan had a fine year but would Cluxton have tried that mad shot against Tyrone? No chance.

2. Jonny Cooper (Dublin) Has grown into the leader of the Dublin defence. Aggressive, physical, no show-boating. A mighty defender.

4. Eoin Murchan (Dublin) A great discovery for Dublin. Marked Niall Sludden out of it twice, did the same to Ryan McHugh.

5. Karl O’Connell (Monaghan) Always a threat bombing forward from wing-back. Speed to burn and a great man to take a score.

6. Peter Harte (Tyrone) Didn’t have a great final but took control of the semi-final against Monaghan at a crucial moment and had a fine year otherwise.

7. Jack McCaffrey (Dublin) Player of the year. The complete package – has the pace, the intelligence and all the skills. A huge weapon for Dublin.

8. Brian Fenton (Dublin) On his way to being one of the best midfielders ever to play the game. Took any amount of attention in the final and still ran the game for Dublin.

9. James McCarthy (Dublin) What more can I say about him that I haven’t said before? The driving force of the Dublin team – untouchable when he’s in full flow.

10. Brian Howard (Dublin) Another great find. Looks like he’s been playing at this level for years.

11. Ciarán Kilkenny (Dublin) McCaffrey’s main rival for Player of the Year. Makes the Dublin attack tick. The second man after Cluxton the opposition has to plan for.

12. Paul Mannion (Dublin) Probably Dublin’s most dangerous forward. Deadly in front of goal, so fast off the mark. Brilliant in the final and semi-final.

13. David Clifford (Kerry) The one bright spot in Kerry’s year. Already the team’s most dangerous forward. The challenge now is for Kerry to get up to his standard.

14. Michael Murphy (Donegal) If only Donegal had kept Patrick McBrearty fit, Murphy wouldn’t have been spread so thin. Showed massive leadership all summer.

15. Conor McManus (Monaghan) Another excellent year. Finished it as top scorer in the championship, always a menace no matter who he’s playing against.