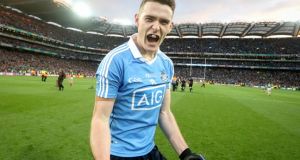 ‘The player of the year would have to be Brian Fenton.’ Photograph: Inpho/Ryan Byrne

The summer is done and we’ll all go away off now and get the heads down for the winter. People give out about the championship all the time but I must say I enjoyed it this year. We got worthy champions, great games in the semi-finals and final(s), a few teams like Tyrone, Tipperary and Galway on the rise. The game isn’t nearly as bad as it’s made out to be.

The Ulster Championship has a bad name, sometimes rightly so. But I’d say there wasn’t a more enjoyable finale to a game all year than the way Tyrone closed out the Ulster final. Say what you like, those guys threw themselves in front of trains all day and when it came down to it at the end, it took a few wonder scores to separate the teams.

For pure drama. It was hard to beat. Michael Murphy kicking one huge free and then pulling another one wide because he was out on his feet. Colm McFadden getting a chance and missing. Seán Cavanagh pulling out an outrageous score beating half the Donegal team on the way. All leading up to Peter Harte.

Harte’s point deserves a category all of its own. The score of the year by a mile. It’s one thing hitting a screamer off the left foot in normal circumstances but to do it in injury-time of an Ulster final with the game on the line is something people will be talking about for years.

What I really loved about it was that he put every last bit of his body into it. With a kick like that, the temptation is to be careful with it and try not to make a mistake. In the back of your head you know that when a kick like that goes wrong, it can go very wrong. So whether it’s a fear of looking stupid or maybe just not fully believing that you can pull it off, you end up not committing to it. Aidan O’Shea’s shot at the end of the drawn final was a bit like that.

But Harte threw himself into it from his head to his toenails. He absolutely put all he had into it, winding his body up like a corkscrew and connecting perfectly with the sweet spot. That score put him a level above the rest for me. He’s gone up from a private to a colonel. He was already one of Tyrone’s best players, now he’s a leader with real authority.

I probably can’t make James McCarthy the player of the championship because he missed so much of it through injury. I’ll tell you this though - he’d be right at the top of my list if there was a transfer market in football. He was only going at half-tilt up until the replay and he was still a force of nature.

The player of the year would have to be Brian Fenton. What I most like about him is that in midfield, you have to be prepared to be good at a variety of different things. You have to be a good kicker, you have to be athletic, you have to be a strong decision-maker. He is all those things. It’s not really a kick-out battle any more but there will still be certain times in a game when it is and Fenton is happy to step up when that is the case too.

I love his temperament. You can see he accepts what is being asked of him. The job is multi-faceted and he’s happy enough with that. At his age, I find it amazing that he can make peace with that amount of responsibility and still be improving his general skills as he goes along.

At different times against Kerry and Mayo, he was kicking off his left, he was starting attacks, he was pointing at fellas and telling them where they should be running. He was blocking shots and he was making strip tackles. He’s only 23!

Above all though, his composure stands out. If I was a Dublin supporter, I’d be looking at him and going, ‘Well, at least we don’t have to worry about that guy for the next 10 years.’ A fella’s form might go up and down, he might get injured or tired or a million other things might go wrong. But generally if you’ve found a guy who makes the right decision every time when he’s 23, he’s going to keep doing that the vast majority of the time for the rest of his career.

Because let’s face it - we all know about the other kind of player. You’re behind in a game and ball finds this guy and everyone watching on is going, “Don’t do it. We all know what you’re thinking of doing - just don’t.” And then he does it, takes the big shot that isn’t on or tries the crossfield pass in between two defenders that hits the sweeper right in the chest. He’s like the guy in Tin Cup who decides he’s staying there until he clears the water.

The addition to the amount of stoppage time at the end of games has been a huge change. You could see it in both All-Ireland finals where Mayo knew they had time to reel Dublin in - if they were good enough. Seven minutes the first day, six minute the second. Cillian O’Connor was able to grab them a draw first time around but didn’t manage it in the replay.

Overall, I think it’s been a great addition. These games are running to 80 minutes and more but it has cut out a lot of the silly little time-wasting things teams were used to doing. There aren’t as many goalkeepers strolling forward to take frees and 45s because everyone knows that time will be added on. Same thing with lads taking half the day to walk off the pitch when they’re being subbed. The ref just shrugs and adds on more time now so why bother?

Teams will get more used to it next year but the implications will still be there for us all to see. Players have to be fitter, referees have to be fitter, there will be more of a premium on decision-making from everyone. If there’s a big wind, you have to decide whether you want to play with it in the first half and build-up a lead or risk waiting until the second half when you’re likely to get an extra three or four minutes of it, as long as it stays strong.

I think it adds an extra layer of complications and intrigue to these games, especially later in the year when the games are on a knife edge. Fair play to whoever decided to finally play the right amount of time.

One thing I’d bring in for next year is a hooter at the end of each half. Even with all the stoppage time that has been added on, you still find referees giving teams one last chance after the six or seven minutes is up. You could see as clear as day in the Dublin v Mayo replay after O’Connor’s free went wide - Maurice Deegan still let Mayo try to build another attack after the kick-out even though we were well past the six minutes. A hooter in the stand takes the emotion out of it all.

1 Stephen Cluxton (Dublin) - No surprises here. The best around, probably the best there has ever been. The key to Dublin’s success.

2 Brendan Harrison (Mayo) - A serious year from a newcomer, especially his man-marking job on Bernard Brogan in the drawn game.

3 Jonny Cooper (Dublin) - Very strong in a new position, never let Dublin down and still managed to get forward at times.

4 Shane Enright (Kerry) - Kerry’s best defender all year, totally dependable and tough as you like. Couldn’t have done more.

5 Lee Keegan (Mayo) - Automatic pick, like they used to have in the All Stars. Great defender, not a bad attacker, brilliant footballer.

6 Cian O’Sullivan (Dublin) - Kept the Dublin defence in line, organised his team around him, very rarely made a mistake. So solid.

7 Peter Harte (Tyrone) - Massive leader for Tyrone who came up with vital scores as well as being part of a mean defensive system.

8 Brian Fenton (Dublin) - What more is there to say?

10 Mattie Donnelly (Tyrone) - Quality footballer, phenomenal athlete. You can see the other Tyrone players looking to him and he usually delivers.

11 Kevin McManamon (Dublin) - Maybe didn’t have a great drawn final but brilliant up to then and had a big replay, forever drawing frees.

13 Paul Geaney (Kerry) - Performance against Dublin was exceptional, living off scraps. Kerry need a few more to join him.

14 Diarmuid Connolly (Dublin) - So gifted and talented but also a real leader too. Always wants to be the one who wins Dublin the game.

15 Cillian O’Connor (Mayo) - Stood up and was counted when Mayo needed him. Cruel that the season came down to his last kick.