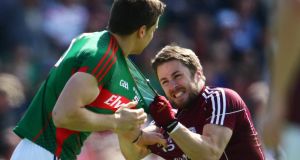 Galway’s Michael Lundy and Mayo’s Lee Keegan wrestle before the ball is thrown in. “The distance between club and county is light years. You never realise it until it happens to you.” Photograph: Cathal Noonan/Inpho

There comes a point in every player’s life when you realise that you aren’t just the superstar you thought you were. It isn’t that you don’t have the talent or the drive or the skills. It’s just that the day arrives when you find out the difference between the shallow end and the deep end. Welcome to the Thunderdome.

I watched the club championships back in February and March and the player that jumped out at me and everyone else was Michael Lundy of Corofin. You didn’t need to be an expert to see that this guy can really play. He was fast, he was direct, he was decisive. When Corofin were in trouble, he called for the ball and drove at the opposition. He was excellent against St Vincent’s and the same again against Slaughtneil on St Patrick’s Day.

There were a couple more stand-out players for Corofin, like Gary Sice and Liam Silke, but you couldn’t come away from those games and not look forward to what Lundy was going to bring to Galway in the summer.

So when I watched the recording of Mayo and Galway on Sunday after coming back from Thurles, he was one of the players I kept an eye out for from the start.

I didn’t know whether it would be Lee Keegan or Colm Boyle who’d be on him but, one way or another, this was going to be a test above all tests for him. Keegan and Boyle are as good as it gets as wing-backs – fast, strong, physical, full of running. Most important of all, they’ve been swimming in that deep water for four or five years at this stage.

It was Keegan that Lundy found himself on and straight away within the opening 40 seconds, the pair of them were wrestling away on the ground. The referee stopped play and went over and flashed a yellow at them both. The camera caught both of their reactions afterwards – Lundy let a big roar out of him, as if to say, ‘Now I have you where I want you’. Keegan just smiled a big smile, saying pretty much the same thing.

If Lundy thought he had Keegan in trouble because he got him on a yellow card inside the first minute, he was about to find out this wasn’t Corofin he was playing for. We ain’t in Kansas anymore, Toto.

Keegan has played in All-Ireland finals, he has a couple of All Stars under his belt. An early yellow card isn’t going to inhibit him or stop him doing what needs to be done. He shut Lundy down for the rest of the game and only picked up his second yellow in injury-time for a bit of spoiling when the game was won. These boys have been around the block too many times to let a yellow card play on their mind.

The main thing I took away from watching Lundy was the massive jump you have to take from being a top-class club player to competing with the big guns at intercounty. Lundy was the best player on the best club team in the country but he hardly made an impact on Sunday. I don’t want to knock him or single him out just for the sake of it, only to make the wider point about the step up in class.

The distance between club and county is light years. You never realise it until it happens to you. People can warn you about it and you can try to prepare yourself but until you’ve gone out and tried something that worked in a club game but falls on its arse in an intercounty one, you won’t be able to get your head around it. It’s probably the earliest lesson you learn.

Club football gives you a false impression of how good you are. That lovely little dummy solo that bought you a yard of space in a club game might work the first time you try it in county training but it won’t the second time. The second time, the defender will strip the ball and laugh at you while he’s doing it.

On the face of it, the game is the same. There’s every chance that when you go in for county training, the drills won’t be all that different to what you’re used to with a good club team. This is a small country and when somebody comes up with an innovative new drill, it crosses club and county boundaries like a rumour. So you’ll see a coach lay out a drill for you and you’ll be happy enough because you’ve seen it before.

But the difference is the speed. Not so much speed on your feet or with your hands. More speed in your head. At club level, the drills are designed to improve your skill with the ball.

At county level, even if the drill is exactly the same, the objective is different. It’s taken as given that you have the skill – the purpose of the drill is to do the skill at pace.

Intercounty football is about economy. Move the ball at a high tempo, cover the ground in the most efficient way possible. For that to happen, these skills have to come as second nature. Club players take time to weigh up their options. It might only be a split-second but in the wrong company it’s a split-second too much.

I loved playing club football. There’s nothing you enjoy in your career more than time spent playing football with the fellas you grew up with. Even though you spend such a huge chunk of your time with the county panel, you long for the simplicity of being back with the club.

Just the pure fun of it. The slagging, the stories, the ducking and diving. My own club An Ghaeltacht went way up to Galway one year to play in a tournament. I wasn’t with them because I was away with Kerry but I heard all about it. There was supposed to be a curfew but sure boys will be boys and by the time they met up for training the following week, all anyone was talking about was whether management were going to take action.

I used travel back west from Tralee with our manager Séamus MacGearailt. The boys knew I’d be in the car with him so I was to suss out what the story was. I got into the dressing room and straight away put them at their ease. Ye’re grand lads. No big deal. Boys will be boys.

We went out and warmed up anyway, before Séamus called us into a circle. And he proceeded to tear strips out of every last one of them! Heedless messers, the lot of them. No standards. No pride. No hope. How could any of them hope to play for the county with this sort of attitude?

As he was doing this, they were all staring over at me, fit to kill me. I felt that they should be thanking me – sure didn’t I give them a few brief moments of happiness on their way to the electric chair?

Some people assume it’s a chore going back playing for the club but that’s not the way it is at all. Apart from anything else, a few county league games are great for the confidence if things aren’t going well. Never underestimate the good it does you to turn a club game your team’s way by making a burst for 15 or 20 minutes and really affecting the game.

But if you’ve been around for a few years at this thing, you know it’s not doing you a lot of good. Short-term, maybe it will give you a boost and get you back some confidence. But long-term, it’s no use to you. You’re playing at a lower level and you’re swanning around barely being touched.

It’s the effect of the environment that surrounds you. Last Sunday, Michael Lundy found that he wasn’t just up to it in that environment. I have no doubt that he will be, just not yet. He obviously has the talent and he’s shown that he is well capable of lighting up games when the circumstances are right.

What he needs now is experience. He needs Galway to go on a run through the qualifiers and make an All-Ireland quarter-final, he needs to come up against good defenders from different counties and get the better of them.

He needs plenty of games for Galway rather than for Corofin so that when he meets Lee Keegan next year, he will be able to give him a better, fuller challenge.