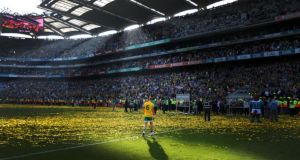 Kieran McGeeney told me a story one time about himself and a few of the Armagh lads going over to see a Celtic game in Glasgow. They got the full works from the club – guided tour, good seats, the whole show. Martin O’Neill was the manager at the time and he came to meet them and brought them into his office in Parkhead to have a chat before the game.

The bit that stuck out for McGeeney years later was that O’Neill was sitting there talking away to them even though kick-off was just over half an hour away. One of them mentioned it to him, wondering should he not be down in the dressing room this close to the game giving his team talk.

“Not at all,” said O’Neill. “All that was done during the week. We’ve planned for the game since Monday – they have their instructions, they know what’s expected of them. They just have to go and do it now.”

I often think of that story in All-Ireland final week. Here we are, four days away from the biggest game of the year and everyone is wondering what the two teams are going to do. How are they going to approach it? How will they set up against each other? We’ll talk and talk for the rest of the week as if it’s all still up in the air.

But the reality is, this has all been decided already. The rest of us can throw around theories to beat the band but the two squads spent last weekend going through their game plan step by step. In the outside world, we’re guessing. But within the two panels, there’s no guesswork at this point. The match-ups are set and players know what their job is going to be. They just have to go and do it now.

An All-Ireland final takes over who you are. You don’t turn your attention to anything else for a fortnight or three weeks before it and you’ll carry it with you for months afterwards whether you win or lose. There’s no other game where you’re caught in the middle of and can’t escape. There’s no other game where your family, friends and neighbours are making plans that cover three, four, five days around it.

Most of all, there’s no other game where losing feels this way. I lost three All-Ireland finals and if anyone tells you they’re just like any other defeat, they’re lying through their teeth. Go around the country and in every GAA pub you walk into, there are photos on the wall of county teams. You could go to every pub in Kerry and you’d never find one of a team that lost a final.

A lost All-Ireland final hangs around the county like a bad smell. You could be driving through a small village like Glenbeigh in the middle of November and there’d be one last green flag hanging off the side of a pub. The week of the final, dozens of them would have been up – flags and bunting and window paintings and the whole nine yards.

But after the final is lost, the enthusiasm doesn’t be long draining away. The flags come down but there’s nearly always one last one left up because a fella can’t be bothered to hop up on a ladder. One lonesome flag flapping in the wind and the rain, a reminder to everyone that the whole thing went to shit.

It changes you as a person. It makes you very cynical towards the whole business of winning and losing. You become defensive as an automatic response to everything. You becomes suspicious of everything that is said about you, good or bad.

When you win a final, everybody says good things about you – and you’re more than happy to believe them. You might take a quiet moment a week after the final to watch the TV coverage and you’re watching whatever pundits are on and nodding along to every word they’re saying.

But if you’ve lost the final, all of a sudden you see right through these pundits. Who are they, anyway? How many finals did they play in? What would they know about the pressure of waking up the morning of an All-Ireland final?

That’s what I mean about it making you cynical. From that point on, no bit of praise that comes your way will feel the same. Praise will actually lose its meaning because at the back of your head you’re remembering what was said about you after you lost the final.

And not just pundits or press. People around the place in the county too. When you win a final, you’ll hang out with anybody. Some man wants to buy you a pint, more power to him. Who are you to disappoint him?

In the immediate aftermath, you just want to get away. There’s no place in the world you feel less like going to than the function that night but you have to go with the protocol. The amount of rubbish talked that night is ferocious. All you want to do is get in to a quiet corner with your team-mates and talk away freely but you know you owe it to the supporters and the sponsors to do your duty.

Those things can be torture. Everybody means well but you just don’t want to be listening to any of it. The worst is the fella who will come over to you with a few pints on him and tell you that you played great but what was the story with the corner back who got roasted or the wing forward who kicked a couple of wides.

You can’t be entertaining any of that sort of chat because soon enough it will breed contempt. Losing is bad enough without throwing blame around the place. You know you should tell your man to get lost and stand up for your team-mate but by that stage, you don’t have the fight in you.

You just let it wash over you and hope he moves on. If it gets to be too much, you pretend your phone is buzzing in your pocket and you have to take the call.

In the weeks and months afterwards, you can’t shift the disappointment. That’s why you always hear retired sportspeople talk more about the big games they lost than the things they won. Because losing a final changes how you see the world. It makes you harder, less naive, less open. When you can’t shake something, you have to carry it with you and that just makes you resent it all the more.

Ultimately, the worst thing about losing a final is that it takes some of the good out of any wins you have afterwards. Not all of it, obviously, but a small bit of it. Winning doesn’t change you back to how you were before.

Because that cynicism stays with you. It doesn’t get wiped away just because you go on to win another one at a later date. In fact, winning another one nearly makes you even more cynical again because all of a sudden, you’re back to hearing good things about you again from the same hobos that were lambasting you when you lost. You get to a point where you close yourself and you decide not to listen to anyone from outside the team bubble.

These are the pressures of a final and it’s why Sunday isn’t just any other game. Dublin and Kerry have both been here before and they all know the terms and conditions. They don’t put up pictures of losing finalists in Dublin either.

There’s a temptation to assume that because both sides have a lot of top-class scoring talent, we’re bound to be in for a classic. But both these sides have lost classics in recent years and I wouldn’t be a bit surprised if they’re not overly gone on the idea of another. Both management teams will set out to curb the other one and I can see the game being fairly cagey as a result.

In the end, I will go with Kerry. I think last year’s All-Ireland will have stood to them and I think they’re a bit further down the road. We all know that goals are oxygen to Dublin so that’s what Eamonn Fitzmaurice will have focused on. Their main aim will be to stop Dublin at source.

I think they can do that and I think they can get in at the other end themselves. Both sides are packed with scoring forwards but I think Kerry have a few more options that you can rely on.

How to get to the Champions Cup final without breaking the bank 05:00
Women to the fore as Sports Ireland announce Olympic grants 01:00
Call for hunters chase to be included in Dublin Racing Festival 01:00
Patrick Mullins confident Leopardstown ground will be ‘spot on’ for Festival 01:00
Callanan aiming to set fresh records with Tipperary 00:30
Crossword Get access to over 6,000 interactive crosswords