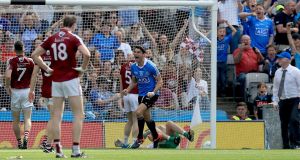 Dublin’s Bernard Brogan celebrates finding the net against Westmeath in the Leinster final. His three points in the second half showed how well he knows every blade of grass in Croke Park. Photograph: Donall Farmer/Inpho

Mid-term in this GAA summer, so what have we learned now all the provincial spoils have been handed out? The pecking order, as I see it, remains: Dublin out in front, Kerry next, followed closely by Tyrone, with Galway and Mayo together.

I also saw a Donegal team in decline in Clones with Cork well capable, on the evidence of their win up in Longford, of denying them another shot at the Dubs.

And there should be a kick in Mayo yet. It seems to have begun against Kildare.

For all the grief heaped on Cork and Mayo for being unable to close the big deal in recent times, neither have any trouble overcoming northern teams. Unlike ourselves down in Kerry. Or even Dublin once upon a time.

But Mayo, and to a lesser extent Cork and even Galway, have gone out and for whatever reason been able to turn them over.

It makes no sense. Reminds me of the great era in boxing when Muhammad Ali could beat George Foreman who destroyed Joe Frazier who beat up Ali.

Mayo are almost back to where they have been at this point in recent seasons. That Kildare performance got the juices flowing again. It certainly removed the Galway loss from their psyche.

Galway have impressed me of late. They have a solid enough defensive structure and I like the way they attack. Above all they are proving that tradition still matters in Gaelic football. Roscommon were overrun in the Connacht replay by Galway’s inner belief as much as a tactical tweak or two. They have medals to prove that winning is no lost secret with two separate gangs of under-21 provincial winners from recent years in their panel. So there is pedigree.

After overcoming Mayo they felt it was their right to win the Connacht title. It’s like a bit of dry hay, one spark can have that whole lot up in flames. Looks like they are getting Derry or Tipperary next. Looks like they will be playing football well into August for the first time in a generation.

But the question that overrides all others is: Can the Dubs be caught? I still think they can. John Heslin caused them enough problems with his back to goal on Sunday in Croke Park to convince the remaining managers and opposing forwards that they can exploit this weakened Dublin defence.

We know how this can be done. They have been remarkable this year considering the decision of Rory O’Carroll and Jack McCaffrey to go travelling but losing James McCarthy, my footballer of the year in waiting, to injury last weekend blunted their transition from defence to attack (until Paddy Andrew arrived). And that was in the face of an ultra-defensive Westmeath.

Johnny Cooper is an athletic defender and Philly McMahon is a physical man-marker but neither are going to dominate their man when balls are coming over head.

Sure, they have other serious attributes but ever seen O’Carroll bombing forward to steal a point? No. Rory always stayed to mind the house.

That makes them vulnerable even with the astuteness of Cian O’Sullivan’s cover. Even O’Sullivan might suffer the severing of the telepathic connection with his Kilmacud Crokes club-mate.

That takes years and years to nurture. I remember whenever I looked up and saw Darragh Ó Cinnéide, be it for An Ghaeltacht or Kerry, I’d know what to do.

Darragh was never the fastest forward in the world but if he made eye contact I’d let the ball go early. Give him that extra yard to create the perception of the rapid forward!

Dublin still have that understanding in other areas. Diarmuid Connolly knows where Paul Flynn or Ciaran Kilkenny will be at any given moment. They all know what they will reap from early supply into Bernard Brogan. Bernard was fabulous against Westmeath. His three points in the second half showed how well he knows every blade of grass in Croke Park.

For one point, shooting into the Canal End, he never even glanced at the posts. Poor Killian Daly had no chance when Bernard, using that unorthodox shooting style when he plants the ball onto his boot with both hands, looked like a robot with an in-built radar.

I also see that sense of calm in Dublin players that Kerry used to have when we were winning All-Irelands. We could go six or seven points down, knowing full well we would turn it around. Such confidence comes from knowing what the men around you are capable of doing.

Even now if we list the top 10 footballers on the island, five maybe six of them are Dubs. Still, no team can suffer the stripping of 50 percent of their All-Ireland-winning defence and retain their title.

At least I don’t think so. McCarthy’s return is crucial.

It requires a 75- to 80-minute performance to stay with Dublin. That last 10 minutes is when they hurt teams the most. Kerry know this better than anyone else.

Kerry and Tyrone have the legs, and panels, to keep pace but both would need at least 12 players going well for 70-plus minutes with only six or seven Dubs showing up on the day. Even then it would be close. They are the only two counties, from where I’m standing in the middle of July, that could catch them out.

I think it is a year too soon for Galway. I expect Mayo to blow past Westmeath and really challenge Tyrone but they are still short one scoring forward to overpower Dublin. Or get past Tyrone in a similar shootout to Clones last Sunday.

That leaves a Dublin quarter-final against Donegal or Cork. I have a sneaky feeling it will be Cork.

So that’s the state of play at the minute. I am actually enjoying the 2016 football championship. Plenty of negative football but such is the modern game. Not much changes this weekend.

It is unlucky that fixtures fall so poorly with Clare versus Roscommon and Derry against Tipperary. Hard sell to entice viewers to Salthill or Breffni Park. That all changes Saturday week when we could, finally, see the demise of this Donegal team. They are in fairness a stubborn lot but I think they were found out in Clones.

Michael Murphy left his A-game at home and while Seán Cavanagh wasn’t as great as history has already noted, due to three fabulous scores, he delivered when it mattered most. Granted, Murphy kicked that mighty late free, and while these are his prime years, Donegal seem overly reliant on him to pull them through.

If you only tuned in for the last 10 minutes you would have wrongly presumed it was an Ulster final for the ages. You would be wrong. It was anything but.

For all of Tyrone’s inspirational late scores by Cavanagh, Peter Harte and Kieran McGeary, the winning and losing of the game occurred down the other end of St Tiernach’s Park. Donegal were in the ascendancy. Just after Murphy kicked that free over the bar off the ground a crucial ball came in to Colm McFadden.

Father Time waits for no man. McFadden made a hames of it. In other years, at his peak, he would have gathered and put it over the bar. That would have made it a two-point game with injury time in view.

Ultimately McFadden cost Donegal a hugely significant victory, a return to the heights scaled when Jim McGuinness was manager and a slowing of this Tyrone rise.

All these things seemed to happen in what could be Colm’s last act in a Donegal jersey. Sounds harsh but I believe if that ball stuck, like it used to, there was a hugely valuable score either for him or the overlapping man.

A two-point lead would have been too much for Tyrone to reel in. Instead their first provincial title since 2010 proved that they never really went away. Two All-Ireland semi-final appearances in 2013 and 2015, when they were supposed to be rebuilding, supports this.

Either way, Tyrone are back on the main stage as champions with a strong squad intent on winning all before them. We have seen the type of momentum Tyrone are capable of generating with previous Mickey Harte sides. They have the players again to achieve this.

What most impressed me was that Dublinesque calmness just after Murphy burst forward to set up the Paddy McBrearty score that made it a four-point game. A huge chasm in a typical Ulster encounter. But Tyrone, despite losing Mattie Donnelly and Cathal McShane to harsh black cards, refused to panic.

Like Galway, there is pedigree there. They squeezed past Tipperary for the under-21 All-Ireland last year. They were reared seeing Sam Maguire visit them in primary school. That matters.

Under a scorching sun, Mickey Harte could turn to a young bench, like Darren McCurry, while Rory Gallagher was looking for inspiration from older men like Colm McFadden.

And sport is never long reminding us that championship football is no country for old men. Father Time catches you every time. I certainly felt it in 2009. I knew from a long way out it was my last lap. Tyrone should drive on but I feel Donegal will struggle to recover in 13 days. Mainly because I think there is a kick in Cork.

Strange to be saying that considering what happened back in June but at this mid-term mark that’s all we can see.