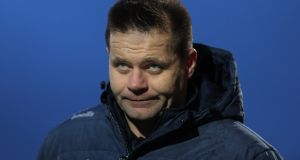 Declan Darcy could be forgiven for shuddering at the current restrictions which have closed the GAA championship season. A year ago, he was Jim Gavin’s right-hand man and coaching Dublin in the foothills of the historically unequalled five-in-a-row season.

The team’s opening fixture against Louth took place this week. Imagine these circumstances back then.

“It depends on what cycle your team is on,” he says, “and at this point last year we were well into our rhythm and possibly towards the end of our cycle. It wouldn’t have helped for it to be disrupted, as we were in a good place.

“For teams trying to reach a pinnacle there would be particular positives for players in a couple of cohorts. Younger players have extra time to train for getting physically up to the level of older panel members.

“Then the older players, who may be challenged by motivation, have a bit of time to reset and also to repair bodies that have a lot of miles on the clock. To my mind, there are far more positives than negatives but the disruption is a definite challenge.”

This is normally the crucial, building phase of a season, as the light-touch regulation of the provincial championships positions counties for the big push ahead.

It adds to a challenging year for the new Dublin management of Dessie Farrell, as they aim to navigate the county farther through already unknown waters.

“The plan of the year would envisage a peak around the time of the Super 8s,” Darcy explains.

He also cites one pressing issue at this time, the managing players’ energies, as the instinct is to drive themselves when that’s not always in the long-term interest of the plan of campaign.

“The nearer they got to the competition and the more tension built, the more they felt they needed to do when less was needed. The big difference between amateurs and professionals is the identifying of time to rest. GAA players have to go to work, which risks fatigue.”

There is also the growing apprehension that something unplanned might happen when there is no time to address it. Dublin were fortunate with injuries in the Drive for Five but Darcy says that wasn’t simply down to good luck.

“The ideal is heading into the last All-Ireland fixtures that you’ve a full panel at your disposal. Then the big threat is losing one of your key players, needlessly. Obviously if someone has a bad accident you can’t programme for that but hamstring or soft tissue injuries we’d feel are preventable because players can be watched and stopped before things get out of hand.”

Yet one of the most anxious injury stories of the last five years was Cian O’Sullivan’s hamstring injury, picked up in the replayed 2015 semi-final. Many believed that Dublin’s chances of regaining the title swung on that outcome.

“There is that fear factor at the critical stages of competition.

“You’re balancing the player’s welfare and the impact on the team and how you weigh up the risk. Initially we were told there wasn’t a hope in hell he’d be able to play in the final so you have to evaluate the information. Then you have to have a discussion with the player and allow him digest the situation and make an informed decision.

“What happened with Cian was astonishing because if you take the initial medical view, he wouldn’t have played and we would have let him off but because of his mental toughness he wanted to have a go and see if he could prove his fitness.

“I’ll never forget the pre-All-Ireland final fitness test he did. Our hearts were in our mouths but he came through a fairly tough test. Still our hearts were in our mouths going to the game but you have to take into account the resilience of the player. It happened a bit. Stephen [Cluxton] broke a finger before an All-Ireland final and no-one knew anything about it. There’s a lot of stuff goes on in the background.”

Mention of the captain is a reminder of one shadow falling on the champions. That’s the sizeable contingent of experienced players, many of whom have contributed to seven All-Ireland wins in a decade, now facing the possibility of losing a year at a stage of their careers when there is no longer a generous supply of them.

Darcy isn’t overly persuaded by the pessimism and argues that there is an upside.

“Everyone gets a bit fixated by the physical implications but a player who’s been there for 14 or 15 years has a lot of mental wear there as well so a break like this might refresh a player at that stage of their career so they get another year or two out of it.”

Dublin supporters would take that.