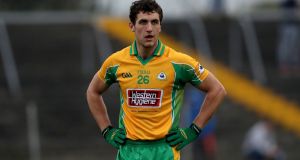 Corofin qualified for their fourth Connacht SFC club final in a row when All-Star hurling full back Daithí Burke blasted home the crucial score of a highly entertaining game at Tuam Stadium.

Burke, an All-Star for the past three years whose football career has been in the shadows of his hurling commitments, came on as a substitute in the second half of this semi-final when St Brigid’s came with a good revival.

The Roscommon champions looked dead and buried when they trailed by five points with 13 minutes remaining but they never gave up and a goal from Cathal McHugh hauled them right back into contention.

That helped them get the gap down to two points but reigning champions Corofin looked set to advance as the game slipped into stoppage time.

But St Brigid’s finished strongly against the wind, with Senan Kilbride cutting the margin to a point with a free from 20 metres and then the former Roscommon player showed commendable composure to force the game to extra-time when he landed one from 35 metres in the fifth minute of stoppage time.

That forced the game to extra-time, with Corofin again gaining an edge against the breeze to lead by 1-15 to 1-14 at the interval, thanks to points from Jason Leonard, Gary Sice and Ronan Steede in response to efforts from the impressive Pádraig Kelly and a 45 from goalkeeper Shane Mannion for St Brigid’s.

The decisive score came just 20 seconds after the restart when Ian Burke collected a rebound to set up his cousin and Galway’s All-Ireland winning hurling full back found the net with a cracking shot.

There was still plenty of time for St Brigid’s to come back but Corofin, having already endured one good revival from the Roscommon champions, closed out the deal this time to set up a Connacht final date with Castlebar Mitchels.

That clash in two weeks will be a repeat of the 2015 final which was won by Castlebar Mitchels but Corofin will hope that coming through this tough semi-final test will have them primed for a record eighth Connacht title.

They were in a good position when they led by 1-5 to 0-6 at the end of the opening half, having played against the wind.

A goal from Ian Burke, after a superb pass from Michael Lundy, saw them draw level seven minutes from the break before Jason Leonard edged them in front for the first time.

They pushed that lead out to 1-9 to 0-7 going into the final quarter but St Brigid’s hit back and McHugh’s goal after a build-up involving Ronan Stack and Kelly, set up an exciting finish.

But in the end Daithí Burke’s goal proved the decisive score as the Galway champions advanced.

Saving their best football for the second half while playing with a strong wind at Elvery’s MacHale Park, Castlebar Mitchels eased their way into another Connacht senior football final.

Having held tough-tackling Tourlestrane to a draw at the interval, while playing against the wind, the Mayo champions had already paved the way for victory.

When their chief scorer Brian Egan shot them into the lead at the start of the second half, the Sligo champions looked set to pose some difficulties for Castlebar.

But they didn’t score again until close to injury time as Castlebar’s guile and experience found ways round the Sligo defence.

And when man of the match Danny Kirby fired home the only goal of the game in the 51st minute following a blistering run through the centre by James Durcan, Tourlestrane ran out of ideas.

It was on strong defending they depended for victory. And they contested every ball fiercely with Liam Gaughan and John Kelly shooting them into an early lead.

But because of shrewd defending by Castlebar’s Ger McDonagh, Donie Newcombe and Paddy Durcan, the goal they needed to strengthen their claim in the second half did not materialise. In addition, they conceded too many frees – most of which were punished by David Stenson, who nailed down six points in the first half.

More astute with the breaking ball at midfield, where Barry Moran and Aidan Walsh worked extremely hard, Castlebar worked their way into the lead for the first time with points by Stenson and James Durcan.

But by half-time Egan and Gary Gaughan had clawed back that lead to level things at seven points apiece, nowhere near enough to cushion the Sligo side through a stormy second period.

When Stenson evened matters in the 39th minute it began a period of dominance in which Castlebar used the speed of their young forward line to good effect.

Points by Neil Douglas, Kirby and Paddy Durcan opened a significant gap. And nine minutes from the end Kirby sealed it with his crowning goal.

Tourlestrane strove for respectability, but although Adrian McIntyre, Brian Egan and Cathal Henry made every effort to break down the Mitchels’ defence, the closest they came was a shot from substitute John Quinn that rebounded off the boot of goalkeeper Rory Byrne, and a point in injury time by James Leonard.

They also had corner forward Liam Gaughan sent off near the end for an off the ball incident.

Subs: S Irwin for Maughan (B/C), S Hopkins for P McCarney; A O’Boyle for Moran; M Towey for P Durcan.