Cork’s strength in depth sees them past Offaly 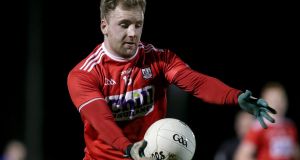 Led by top-scorer Michael Hurley, who was introduced at half-time, Cork made a winning start to their Division 3 promotion drive, though Offaly battled well.

Inspired by Bernard Allen, Anton Sullivan and Ruairí McNamee, the visitors led by 0-7 to 0-3 after 23 minutes, but Cork whittled it down to the minimum, 0-9 to 0-8 by the interval.

Referee Derek O’Mahony had a busy end to the first-half, overturning an umpire’s decision to wave a Cathail O’Mahony wide, when it was at least a foot inside the upright.

Then he dispatched Cork coach, Cian O’Neill, to the stands for dissent before Allen entered the sin-bin for a cynical foul on Sean Powter.

Cork made good use of their numerical advantage on the resumption, kicking three points without reply to take a firm grip as Offaly went 19 scoreless minutes before Allen’s 52nd minute free.

And then at the other end home custodian Micheal Aodh Martin made a timely double save from McNamee with four points between the teams.

It was down to three, 0-14 to 0-11, on the hour but another substitute John O’Rourke kicked two points either side of a Hurley free.

The new surface came in for favourable mention. “I should have brought my slippers instead of the ‘wellies’,” quipped Offaly boss John Maughan.