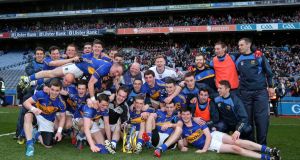 The Tipperary team celebrate with the trophy after winning the Division Four final. Photograph: Inpho

Tipperary 1-16
Clare 1-15
Inspired by the excellence of corner forward Conor Sweeney, Tipperary held off the challenge of a resilient Clare in Saturday’s NFL Division Four league final in Croke Park.

Tipperary also won when the teams met in the regulation league game in Thurles, although Clare performed significantly better this time.

Sweeney was Tipperary’s main man in attacking, scoring their goal in the opening half and kicking an array of impressive points.

Tipperary led 1-7 to 0-9 at half time thanks to Sweeney’s 19th minute goal. Were it not for two excellent blocks from Clare full back Kevin Hartnett Tipperary could have scored at least one further first-half goal.

Big stage
At the far end Shane McGrath kicked four magnificent first-half points, and while he kicked four wides in total the Thomas Davis clubman showed his class on the big stage. So did David Tubridy, who lit up GAA headquarters with some superb points from play.

The highlight of Clare’s display was a magnificent goal early in the second half from Martin O’Leary who was played in by fellow U-21 Jamie Malone.

At that stage Clare led 1-11 to 1-8, and, backed by a strong wind, it looked as if their first appearance in Croke Park since 2004 would end in victory. However, they added just four points in the closing half-hour, with Tipperary tagging on 0-8 during the same spell.


Fine points
As the second half developed Tipperary upped their game and scored some fine points, with Sweeney and Barry Grogan regularly finding the target.

“It’s a great feeling, to be honest,” said Tipperary captain Paddy Codd after lifting the cup. “We have all put in a serious effort since before Christmas and it paid off today. We targeted promotion from Division Four and a win today was a bonus.”

Clare manager Colm Collins said the defeat was down to sometimes not sufficiently protecting the ball.

“It’s disappointing to lose. I thought our lads played well and did a lot of very good things, but we turned over the ball too much and we paid the price.

“You’ve got to keep the ball against decent opposition and you don’t get away with things like that. So we’ve got plenty of things to work on before we play Waterford on June 8th.”