Conor Laverty knows another giant-killing act is not beyond Kilcoo 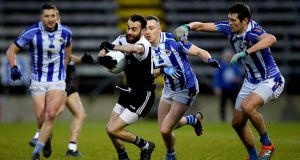 We came to talk Kilcoo and began with a lesson about Trinity. Conor Laverty has a few different football interests going at the moment, beginning each day as GAA development officer in the college campus founded in 1592, and somehow seems to find time for them all.

The Kilcoo forward, club vice-captain, and former Down player who featured in the 2010 All-Ireland final defeat to Cork, has for nine years now been commuting from his home on the family farm at foot of the Mourne Mountains. It’s a journey that in some ways mirrors that of his club.

“Yeah nine years in Trinity now, so well used to it,” he says. “In fairness, Trinity are fantastic, the hours are that bit flexible. Only for that I probably wouldn’t be able to do it.

“When I came, in my first year, the boys were in division two, and in total, the year before, had trained 11 times. In my first week we trained over 11 times. I’d just seen the culture wasn’t what I expected and wanted it to be.

“So for the first couple of weeks we did some morning and evening sessions, just to get the boys up to speed, a reality check is what needed to happen. We went through that year then unbeaten, won division two league and championship, and got Trinity promoted into Sigerson football, for the first time in over 20 years.

“The hurlers have been fantastic, coming from division two, now competing in Fitzgibbon, very unlucky the other day not to get their first win in a number of years, but have really blossomed.

“It is a struggle sometimes, because of that perception, a lot of students come to Trinity first and foremost for the academic side of things and that is totally understandable. But Trinity sport are putting great structures in place, they have got a new scholarships programme going and we are working very hard to identify and attract the top end of players into the college.”

In addition to this role and daily commute, Laverty is a coach with several of Kilcoo’s underage teams, part of Séamus McEnaney’s Monaghan backroom team, and a father of four boys between the ages of two and eight.

“It’s an early start each day, very early, maybe get a bit of farming done as well before I go. I suppose you have to live in the present, you don’t know what will happen down the line, but at the minute, it’s working okay, I’m lucky I’ve a great family around me.”

His journey with Kilcoo essentially began in 2009, when the club bridged a 72-year gap since last winning the Down football title, winning seven titles since, and last December claiming a first Ulster title.

Since then they took out Dublin club giants Ballyboden St Enda’s in the All- Ireland semi-final, and on Sunday in Croke Park, face giants of a different sort in the form of Galway champions Corofin – the first club in line to win a third successive All-Ireland, in either football or hurling.

We went into the game knowing the challenge Ballyboden would bring. They’re a fantastic team, a very strong, physical outfit. We were just looking to get a performance that we were capable of. We thought if we done that we’d be able to get the result. There was nothing won against Ballyboden.

“Personally I’m not a big believer in this whole money aspect of things. I don’t buy into it. I think that if you have a bunch of players who are willing to put their lives on hold, give everything towards the one cause, the sky is the limit for them. In the club championships that’s very evident, whenever you get teams that don’t have the same memberships, don’t have the same funding, coming up against other opposition – I don’t see the reason why it can’t be the same at intercounty level.

“Win or lose, Corofin are in the bracket of being the best club team of all time. They’re a fantastic, fantastic team. Play a great brand of football. You have to admire them for that. They’re going for three-in-a-row – that probably brings its own pressure with that.

“As a team, we’re just fully concentrating on ourselves, looking to get a performance that will do ourselves proud and ultimately do our village proud on the day. We are up against. It’s going to be an extremely difficult game.”