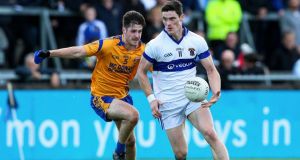 Diarmuid Connolly of St Vincent’s is tackled by by Senan Coughlan of Na Fianna during the Dublin SFC round two tie at Parnell Park. Photograph: Tommy Dickson/Inpho

Dublin SFC round-up: Favourites St Vincent’s recovered from the concession of a first-minute penalty to eventually account for a spirited Na Fianna by 1-14 to 1-6 in Sunday’s second-round tie at Parnell Park.

Aaron Byrne converted from the spot for Na Fianna but with Tomás Quinn and Enda Varley adding two points apiece, St Vincent’s regained control and an excellent Diarmuid Connolly goal in the 30th minute pushed his side 1-6 to 1-2 ahead at the break.

Earlier in the day, Dean Rock kicked 1-9 in helping Ballymun Kickhams to overcome St Brigid’s by 1-16 to 0-13.

After Shane Supple had denied Ballymun on two occasions, he proved powerless to deny Rock in the 28th minute after an incisive pass from Kevin Leahy as Kickhams enjoyed a healthy 1-7 to 0-3 interval lead.

Paddy Andrews and Kevin Bonner impressed in the Brigid’s forward line upon the restart as they shared seven points in total but with Rock adding five second-half points, Ballymun eased home thanks to two points by Liam O’Donovan with James McCarthy replaced at the break as a precautionary measure.

Elsewhere in the championship on Sunday, Skerries Harps, Castleknock and Raheny all advanced at the expense of Whitehall Colmcille, St Sylvester’s and Parnells respectively.

In an evenly contested opening half, Mannion’s goal inched Crokes 1-4 to 0-6 ahead at the break with David Nestor’s wonderful block from Andrew Kerin of equal significance at the opposite end.

However, Kilmacud dominated the final quarter with a trio of defenders in Cillian O’Shea, Andrew McGowan and Aidan Jones all scoring while Vaughan took his personal tally to eight points by the close.