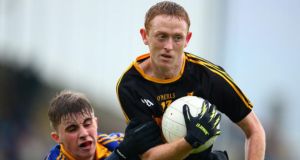 Phil Jackson the former Chicago Bulls coach wrote that the greatest quality a team can possesses is not a group of superstars but that they should possess “comebackability”.

Pat O’Shea the Dr Crokes coach could say the same thing as Crokes after struggling for two years since their four-in-a-row of Kerry SFC titles from 2010 - 2013, proved they are the comeback kings winning their fifth in seven years, when they easily outgunned Kenmare District at a wet Fitzgerald Stadium on Sunday.

It was also title number six for two of their gifted performers, Colm Cooper and Eoin Brosnan who won their first as youngsters back in 2000. It was a game where Colm Cooper showed that he has lost none of his magic as he conducted affairs upfront albeit without a baton, but his distribution, leadership and seven points, including 0-4 from play, saw him take the man of the match award. In fact Cooper along with Eoin Brosnan was winning their sixth Kerry SFC medal; they have 2000 to add to the five over the last seven years.

Kenmare put it up to the Crokes at different stages but simply lacked the firepower that their winners possessed and despite the outstanding displays of players like Adrian Spillane, Tadgh Morley and Paul O’Connor, Crokes curbed their danger men and the result was inevitable soon after half time.

The sides were tied on 0-3 apiece at the end of the opening quarter with Cooper getting 0-2 and Kieran O’Leary 0-1 while Paul O’Connor responded with two for Kenmare and Killian Spillane scored a sublime point from near the touchline.

However Crokes in the shape of Daithi Casey, Gavin O’Shea and Kieran O’Leary began to weave some magic for Crokes as Cooper directed operations. Points from Cooper, Shane Murphy ( ‘45), Ambrose O’Donovan and Cooper from a free, saw Crokes move 0-7 to 0-4 clear as Kenmare District were over -reliant on the free taking of the mercurial Paul O’Connor.

Then Crokes struck for the opening goal in the 26th minute when Fionn Fitzgerald pounced on a Kenmare error and fed Kieran O’Leary and the former Kerry captain, slipped Dara Crowley, before planting the ball low beyond Kieran Fitzgibbon. It was just what Crokes needed but not the game as Crokes retired 1-7 to 0-6 in front at half time and the signs for Kenmare District were ominous.

Crokes assumed complete control in the second period as they weaved their magic in attack with Colm Cooper giving a man of the match display with some trademark scores and flawless point taking.

Michael Burns came off the bench and kicked the first point of the second half but when Gavin White placed Johnny Buckley in the 34th minute for Crokes second goal Kenmare District had a mountain to climb.

In fairness to Kenmare Teddy Doyle struck back immediately with a goal but it was to be their last score in 8 minutes and in that period Crokes tacked on five points without reply with Kieran O’Leary and Brian Looney in particular kicking some excellent points, Looney finishing with four in the second half. Cooper added three and substitute Jordan Kiely adding one from the bench Kenmare’s challenge fell away.

The Crokes cruised to victory with an up-tempo performance claiming their 11th senior football crown and on this display they will be live contenders for the Munster and All-Ireland club series.