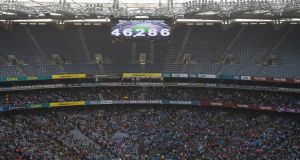 The Dublin-Mayo women’s final attracted a record attendance of 46,286 – but the women’s wing of the GAA can still run their house better. Photograph: Stephen McCarthy/Sportsfile

It was halfway through the second half of the All-Ireland ladies football final and Mayo, three points behind but still very much in the game, had launched another raid from the middle third on Dublin’s goal.

As Aileen Gilroy soloed forward towards the ‘21’, Cora Staunton raced straight out towards her, appealing for the ball, even as the two Dublin defenders who had shadowed her all day were in hot pursuit.

The ball arrived in Cora’s hands but she was immediately swallowed up by a combination of her two shadows, and the two Dublin players who had attempted to get back at Gilroy as she soloed forward. Frustration got the better of me – “why is she demanding the ball there? She has two players on her back, her movement has to be better. Get out of Gilroy’s way, and then either Gilroy kicks the point, or Cora gets the ball on the loop”.

There should probably be a law against criticising Cora Staunton, but rigorous analysis of the game made it unavoidable – her towering status in the game, perversely, demanded it. And at heart, although criticism in the aftermath of an All-Ireland final might be tough to take, what a relief it would be if conversation after huge events like last Sunday revolved exclusively around that – around the game, the players, and the tactics that finally won the day for Dublin.

Too often when we speak to female sportspeople, it’s a ‘state of the union’ conversation – where we ask them to tell us about resources, attendances, and scrapping for attention in a crowded media landscape. It’s not often enough purely about the game, about the mechanics of her sport, and achieving excellence in that sport.

Last week’s game was an easy sell – Dublin looking to avoid losing four in a row, up against Mayo and Cora, looking for a fifth title, 14 years after the last, and perhaps a last hurrah on the biggest day for the sport’s biggest star. The game didn’t disappoint.

The first 20 minutes was intriguing, with Mayo the better team but not making that advantage count on the scoreboard. The middle third of the game saw a dip in quality as indiscipline cost Mayo, and Dublin’s nerves overcame them as they missed chance after chance. Then, with the finish line in sight, the winners kicked for home spectacularly, definitively.

The women’s final last weekend was a watershed, if you want to look at it that way. You’ve already seen I’m sure the comparative attendances at other women’s sporting events . . . and this in a summer across the Irish Sea that many people are calling a turning point.

Football’s Uefa women’s European Championship final had 28,182 paying customers, the women’s FA Cup final had 35,271. There were 26,500 at a sold-out women’s Cricket World Cup final at Lords between England and India in July.

Further afield, the AFL in Australia launched a hugely successful women’s league, the opening game of which attracted a sell-out crowd of over 24,000 people, with 2,000 people more locked out, outside the ground. And yet, that figure number from Croke Park – 46,286, soars above them all.

Lidl’s ground-breaking, and truly mindset-changing promotion campaign can take some of the plaudits. TG4’s year-round coverage, too. And yet, behind it all, the women’s wing of the GAA can still run their house better than they are currently. You’re not talking about marginal gains to move this on – you’re talking about easy fixes, and huge strides which can still be made.

The oft-mooted amalgamation of the camogie and women’s football associations (let alone the inevitable join-up with the GAA itself) still hasn’t happened, and as long as that situation pertains, the feeling persists that opportunities are being missed.

And it’s not just promotional opportunities – we’re also talking about avoiding the shameful fixture clashes that has often put some of Irish women’s sports biggest names in the invidious position of having to choose to play for either their hurling or football teams, as Rena Buckley and Briege Corkery have had to do in the past.

The attendance at last week’s finals was huge, but only a tiny percentage of that was at the semi-finals. And why are we still calling it ‘ladies’ football? Surely it’s women’s Gaelic football!

These problems, big and small, are mentioned purely to emphasise that for all that has gone right so far, the potential for both camogie and women’s football to continue to grow is huge. The crowds at men’s games are about as gender-balanced as any major men’s sports events you can think of. The culture of women going to GAA sporting events is deeply ingrained.

We in the media perhaps have most to learn from the past two weeks. Unprecedented media coverage in the week before the All-Ireland final led to an unprecedented crowd through the turnstiles. If instead of state of the union addresses, our biggest female sports stars talk to us directly about the rivalries, the incidents, and the games themselves, then last Sunday can become the true watershed it looked like.