Clash of Dublin and Mayo under lights, with Sam Maguire on the line, promises to be special 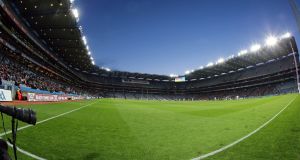 We have the prospect of the game’s two best teams, with the two most rabid, noisiest fan-bases, under lights, with it all on the line.

We should remind ourselves, once in a while, and for balance, that Eamon Dunphy has written some of the greatest sports books of all time. Only A Game? gets all the plaudits, but I always thought that A Strange Kind of Glory, his seminal take on Matt Busby and Manchester United, was his masterpiece.

One of the book’s most spectacular successes is in painting a picture of what football was like in the 1950s in England; the mud, the grime, the struggle. It also brilliantly tells how the creation story of the European Cup was in many ways a story of floodlights and television.

Wolves had been crowned by acclamation in the British press the ‘Champions of the World’, after winning a series of night-time matches against the continent’s best teams – the ‘floodlit friendlies’ of the early 1950s which were shown live on the BBC and which captured the imagination of austere post-war England.

Wolves would be locked out of the inaugural playing of the tournament, in 1955-56, because the English FA didn’t allow them to enter, but Busby was not to be denied. When United won the league in 1956, they became the first team from England to take part in the European Cup.

Old Trafford didn’t have floodlights so the first three games of United’s European adventures were played at Maine Road, Man City’s old ground. But the people of Manchester, and soon all of England, were hooked.

As Dunphy tells it, Busby understood what those extraordinary first nights in Europe meant; it was escapism, pure and simple, and it would soon be a staple of English football and English fandom – the idea of European football, glamour, and big games under floodlights became inextricably linked.

We have been a little slower to adapt to the idea of floodlit games in Ireland. There were a few rollicking good nights in Dalymount Park, including the arrival of Italy as world champions in 1985, but Lansdowne Road didn’t have floodlights for any of Big Jack’s early successes.

I remember our local GAA club getting some, admittedly terrible, floodlights in the early 90s, before Lansdowne Road had them – which seemed as bizarre then as it does now.

The potential glamour of a first training session under lights was offset somewhat by the danger of not being able to see further than 20 yards in front of you.

So if you mention floodlights to your average GAA club player, they are more likely to think of training in January in the driving rain, than anything too glamorous.

At intercounty level, it evokes images of league games in Páirc Ui Rinn or Portlaoise. But this weekend, we have the prospect of the game’s two best teams, with the two most rabid, noisiest fan-bases, under lights, with it all on the line. It is an enticing prospect.

No one will be clamouring for All-Ireland finals to be played on Saturday evenings in perpetuity, given the inevitable traffic delays and difficulties for people trying to get off work for the day, but it has the potential to be special. And this is a proper floodlit game, with a 5pm throw-in, not a game played in such horribly wet conditions that the floodlights are on as a precaution.

This weekend will feel new, and staying up in Dublin to celebrate on the night of the game need not necessarily even be a job-endangering move, if our cousins from the West do the business.

The 2013 All-Ireland hurling final between Cork and Clare was the first Saturday evening throw-in for an All-Ireland final, and it was spectacular. This Saturday can be glamorous and exciting for us for the same reasons that bewitched Matt Busby and Manchester United 60 years ago this week in their first ever European Cup game – the idea that as the lights go down outside, in here the day need never end.

It’s like watching a film in the cinema, where the world shrinks to just you in the darkness and what’s illuminated in front of you. Let’s hope it lives up to the billing.