Ciarán Murphy: Is Gaelic football ready for the Super 8s? 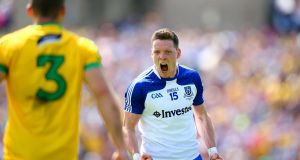 Monaghan’s Conor McManus celebrates scoring a point against Donegal. Prepare for him to do something outrageous – something that we had all only dreamt of doing in our time playing the game. Photograph: Cathal Noonan/Inpho

So, Gaelic football. Are you ready for your close-up? Like Norman Bates or Harry Lime, this summer’s movie is half-over and you haven’t shot your first scene yet ... so best make it count now that the cameras are trained on you.

I heard this week from an Armagh man who expressed an element of relief after their defeat to Roscommon on Saturday that his team were allowed another year to build before getting into the big show.

Certainly the GAA got lucky with its Round 3 and Round 4 qualifier draws. All the big teams, with the exception of Mayo and Kildare, were kept apart, which means that we go into this inaugural All-Ireland quarter-final group stage with eight teams from either the 2018 or 2019 version of Division 1.

There’s every chance we’ll see the game in its best light over the next few weeks, and we might even celebrate it a little by its end. And, lord knows, we have a tough time celebrating it. It has a place in our hearts very similar to that which baseball occupies in America.

I read a piece online recently which quoted a newspaper article on baseball’s many ills – how the current-day players had changed, how money had corrupted the sport, how the games were too long. These are all modern-day complaints...but the newspaper article outlining them was from the 19th century.

We complain endlessly about the same things, but the place of baseball (and Gaelic football) in people’s sporting lives is unassailable. It’s like the weather.

When Donal Óg Cusack or Daithí Regan or any of the other mystics of hurling analysis talk to us about how difficult it is trying to catch a ball as a defender against a left-handed attacker, many of us have no real-life experience to match it up with.

I read a piece in the Times Ireland edition last week where the author talked about how Gaelic football was the national game that nobody played outside of a match situation. I would’ve spent hours as a kid catching and kicking a ball the length of our back garden with my dad or my brothers, but the basic premise that there’s no such thing as “pick-up” or “street” Gaelic football is more or less correct.

Yet I’m not so sure we should necessarily bemoan the lack of a “Gaelic football five-aside” culture. The fact of the matter is that I’ve played football matches running the gamut from county finals to deep and complete triviality, and they all very quickly assumed their own importance.

I remember playing a senior club challenge game in late January against a neighbouring club. We had barely jogged to our positions and exchanged handshakes and hangover stories before a massive row broke out sparked by our player’s annoyance with his direct opponent who was wearing a training top over his jersey because he was so cold.

The following 55 minutes was played out in a frankly murderous atmosphere. Why would you want to play a perfectly polite five-a-side game of soccer when the chance to get involved in an all-out war with your neighbour – over a training top, for god’s sake – is the alternative? It always matters. There aren’t too many that make grandiose claims on GAA football’s behalf. We know that rugby and soccer have their acolytes, and, if I’m being honest, I don’t know that I’d be able to hold my own if someone tried to strong-arm me into convincing them that Gaelic football had no equals as a team sport.

But I do know that at some stage in the next three weeks Conor McManus, Shane Walsh and Paul Geaney will do something outrageous – something that we had all only dreamt of doing in our time playing the game.

Dublin will probably take our understanding of how to play the game as a collective to another level.

Michael Murphy will similarly test the limits of our expectations of what one man can achieve, and he will expect a few of his team-mates to follow him.

I’m hoping to be entertained.