Ciarán Murphy: Exiles take centre stage as season finally gets up and running 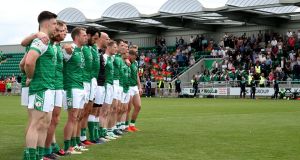 London line up for the All-Ireland qualifier against Carlow last year. “Often those playing in London or New York are young fellas who were anxious to get away from the stifling cheek-by-jowl existence of small-town Ireland.” Photograph: Gerry McManus/Inpho

It is ‘International Week’ in the GAA this week, with London hosting Sligo and Leitrim travelling to New York in the first two of three Connacht championship quarter-finals. And there are a couple of reasons why this combination of fixtures on Sunday is garnering a little more attention than usual this year.

First of all – at long last, some games! We have been starved of action this April. Last year’s hurling league final was played on April 23rd, so we might have been forgiven for being a little blasé about the build-up to the Sligo/New York game which followed just 14 days later.

But it’s been a long four weeks since Kilkenny beat Tipperary in Nowlan Park in the league final, for those of us yearning for some action on the inter-county scene.

I’ve played two championship games this month, and as a club player that has been fine – when you’re playing in Dublin’s Division 5, thankfully every month is club month (lions may not concern themselves with the actions of sheep, but actually most of the time us sheep aren’t too bothered about the actions of lions, either).

For the floating fan however, May couldn’t come around quickly enough. If these two games are a gateway drug to the real stuff starting the following week, then there are quite a few people happy to get their kicks wherever they can this weekend.

There is also the not entirely ludicrous possible scenario this weekend where both London and New York are victorious. London have perhaps been stronger in recent years than they are this year, but Sligo only won two games in Division Three.

True, Sligo have some confidence coming into this, after they won their battle for survival against Derry in the last round of the league in Markievicz Park, 3-11 to 2-12. Their manager last year, Niall Carew, seemed a little put out that New York fancied their chances against them, saying in the aftermath of his team’s eight-point win in the Bronx that their hosts had disrespected them in the run-up with their bullishness (he must have never met a New Yorker before).

But a glance at London’s results in Division Four suggests London shouldn’t be too downbeat in their self-assessment either.

They only lost to Laois by two points and were within a couple of points of Antrim and Carlow too, and they were the three best teams in the division by a distance. Even taking into account all those games were in Ruislip, would Sligo fancy themselves to beat those three teams? I’m not entirely sure.

The likelihood remains that Leitrim and Sligo will emerge victorious, but an unlikely double for the two international teams would be an extraordinary development. You’d have to hope that it would be a spur for further development in both cities, and not spark a reaction similar to a winning streak for UCC or NUIG in their respective county championships.

Whenever that used to happen, it quickly became clear that universities in county championships were always more than welcome . . . until they started winning. That was usually when the cead míle fáilte’s started to run out.

Regardless of how they get on this weekend though, the presence of the GAA in cities like London and New York is something to cherish. Having spoken to many people who have played the games while abroad, a picture often emerges rather different to the one of the popular imagination, where it’s a link to the old country for homesick young people.

Often times the people playing in places like London or New York are young fellas who were anxious to get away from the stifling cheek-by-jowl existence of small-town Ireland, which is perhaps for better or worse best exemplified by the GAA.

Missing training, or prioritising work or your social life, was seen not as a personal choice, but an affront to your fellow club members, not just your team-mates. The emotional blackmail that powers so many clubs can be a pretty powerful weapon.

But the chance to play the game in a new city means a chance to make a decision for yourself whether you want to play. And if you don’t want to play then that’s your decision too. It’s not always as easy as that at home.

Playing hurling or Gaelic football in a foreign country gives you a chance to enjoy the game for the sheer sporting thrill of it all, away from the well-meaning tyranny of the “One Life, One Club” ethos.

Regardless of the results this weekend, and regardless of whether London and New York continue in the Connacht championship, that’s something worth holding onto.