Ciarán Murphy: Carlow should get day in the sun on home turf 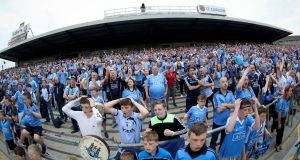 By the time they take the field on Saturday evening, the Dublin footballers won’t have won a game for two months, a drought that stretches all the way back to April 2nd. Are they a team in crisis?

The number-crunchers among you may try to explain away this interminably long wait for a win for the Dubs by, you know, mentioning that they have only played one game in that time – which they lost – but with each passing week, their life-force continues to be drained from them.

They’ve played eight games so far this year, and have a win ratio of just 50 per cent. They are weak, they are vulnerable, and all Carlow have to do this Saturday evening is get in the ring with them, and put them out of their misery.

Others, I understand, may see it differently.

Regardless of the likelihood or otherwise of a Carlow win this Saturday, speaking and listening to their players over the last couple of weeks since their first round win over Wexford it’s clear they are looking on playing Dublin on live television as a massive reward for the work they’ve put in.

But again, the Leinster Council has failed in its fundamental job of ensuring that the Leinster championship is run equitably. The reward for facing Dublin, if you’re not going to play them in their home ground of Croke Park, should be a game in your home ground.

As we all remember, Laois played Dublin in Kilkenny in last year’s Leinster championship, with the rationale given at the time that Nowlan Park had more seats to accommodate Dublin season ticket holders, and a bigger capacity overall.

This year, having seen that the Laois-Dublin game last June didn’t even sell out, the Leinster Council believes Portlaoise is now fit to host a quarter-final, with the Dublin season ticket holders taking over up half of the stand. It would appear there aren’t enough stand seats in Cullen Park to fulfil that requirement.

I will wager that if you have paid for your season ticket, you spent your money to save a few quid over the course of the league, and then, most importantly of all, to ensure the chance to buy a ticket to the All-Ireland final, if your county gets there.

If the GAA guaranteed stand tickets ‘where possible’ to all season ticket holders, I don’t think you would lose one customer. Effectively handing over control of your fixture-making to 3,000 Dublin supporters (through no fault of theirs) is so wrong-headed as to be almost beyond parody.

The second part of that rationale, that there should always be enough tickets for people who want to go to a game, is classically GAA. I’ve written before that the ideal GAA crowd is precisely one below the full capacity . . . so they can be sure that absolutely everyone who wanted to attend got a chance to spend their money.

When a game is sold out in most sports, that’s a reason to celebrate. In the GAA, it’s a reason to ask why we didn’t move it to Croker. The Carlow manager Turlough O’Brien said on The Sunday Game that Netwatch Dr Cullen Park could hold 16,000 people. In actuality, it appears to be closer to 11,000.

If we are denying people from Carlow the chance to welcome the All-Ireland champions to their home town for the sake of 6 or 7,000 extra tickets, which is the difference between the capacity in Dr Cullen Park and the capacity (which will probably not even be reached this weekend) in Portlaoise, I believe the GAA should forfeit the extra ticket money.

None of this is Dublin’s fault, of course. There is no double-header in Croke Park for the Leinster football semi-finals this year, so there’s an excellent chance the All-Ireland champions will play Offaly or Westmeath in a venue outside of Dublin 3.

But the game this Saturday should be held in Carlow. Last year’s quarter-final should have been held in Portlaoise. Dublin are an adornment to the game, and the promotional value of welcoming them to a county like Carlow can’t be overstated.

But it’s not even about that. Neither is it about the economic benefits of the Dubs landing to your town for a June Bank Holiday. And it’s not even really about giving teams an opportunity to go and actually beat the Dubs – no-one really thought Laois were going to shock them last year, wherever they played, and that probably applies to Carlow this weekend.

It’s about feeling like equals when you enter the draw with Dublin every winter, no matter how unequal you are on the field, or in the boardroom. Being allowed to bring them to your parish might just make other counties feel like the cards aren’t stacked against them before the championship even begins.