Ciarán Kilkenny to the fore as Dublin brush off resilient Westmeath 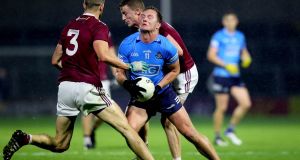 The incumbents fared better in Portlaoise than in other parts of the world on Saturday night, as Dublin brushed off a resilient Westmeath in the Leinster quarter-final in the swirling rain that has become the signature conditions for this winter championship.

More in keeping with the transatlantic comparison, it was no landslide, as the first county to set out in pursuit of a sixth successive All-Ireland were relatively low-key but there was a cut and sharpness to their play in the first half, as they found scores against the opposing mass defence.

Westmeath manager Jack Cooney was disappointed with the number of turnovers conceded by his team in that period, at the end of which they trailed by nine and the contest was effectively done.

But they battled well in the second half, got out-scored by only two further points and had a couple of goal chances, which was more than the champions managed but they were in cruise control by then.

Ciarán Kilkenny gave the most eye-catching display for the winners, shooting five points from play and putting in one of those perpetual motion performances, which saw him cropping up in his own full-back line from time to time.

From Dublin’s point of view there were positives. Securing a win in the first championship match of Dessie Farrell’s tenure without undue incident would have come as a relief to the management and there were some new faces in evidence. Tom Lahiff started at centrefield and showed the requisite appetite and battery for the fray, completing the 70 minutes on his debut.

The champions anaesthetised the match in the early stages, patiently going four ahead with a quick-fire volley of points and when the margin was halved, they raced away again, probing the Westmeath defence with the familiar possession game and capitalising on any errors to keep the scoreboard ticking over.

With the bit between their teeth they were effective. Fifteen points by the break was a decent total and all six starting forwards had scored from play by then - the total kept clicking by Dean Rock’s faultless free taking.

The challengers did their best to put pressure on the attackers and James Dolan put in a spirited block when Brian Fenton was a bit too languid in the 14th minute and the Westmeath wing back counter attacked with such gusto that only dramatic interventions by John Small, a little unjustly penalised, and Robbie McDaid with a great block denied him.

Kevin Maguire at full back was exceptionally good throughout, reining in Con O’Callaghan for a while and generally proving hard to pass, turning over Kilkenny at one point in the second half.

Towards half-time though, despite a defiant point from the left sideline by Ray Connellan on the stroke of the break, the effort of it all was beginning to take a toll on the underdogs and you’d have got long odds on their proving so hard to shake off in the second half - in fact they finished stronger.

John Heslin kicked a miracle point in the 44th minute, having been bottled up by three Dublin defenders and somehow finding the space to shoot the team’s seventh point.

By then the match was being played at an average distance of about 10 points to Dublin so there was never any sense of uncertainty about the margin slipping to unexpectedly low levels - although by the standards of the fixture, this was by no means the worst reverse suffered by Westmeath.

There was concern for Farrell when Eoin Murchan collapsed in a heap with a few minutes left and had to be helped off but it was confirmed afterwards that the flying defender had just sustained a cramp.

So, the champions are now up on the treadmill with matches coming thick and fast if they keep winning. Next up will be the winners of the Laois-Longford quarter-final, at Croke Park next Sunday.