Ciarán Kilkenny just delighted to be back playing games 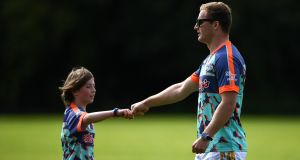 Dublin footballer Ciarán Kilkenny with Thomas Keville at the Kellogg’s GAA Cúl Camp in St Brendan’s GAA Club, Dublin. “To be even going out playing games, playing the games that we love, playing with your friends, we are just lucky to be in that position.”Photograph: Harry Murphy/Sportsfile

For counties hoping that the sheer strangeness of 2020 might help to budge Dublin’s position at the top of football, Ciarán Kilkenny’s demeanour isn’t terribly encouraging.

Even though this is a late July like no other – to borrow a phrase – he isn’t making any concessions to what might appear to be a less guarded environment with inter-county activity the best part of three months away.

Talking to media to promote the Kellogg’s Cúl Camps, which have made a welcome return to the summer, Kilkenny dutifully name-checks the activities as well as gamely looking to steer conversation back to the club when the county stuff arises.

It’s a display as full of patient reprocessing as those bravura displays in Croke Park where he appears to conduct the entire Dublin team, popping up relentlessly in those sequences of keep-ball to direct the play.

Despite a career, clanking with medals – including six All-Irelands – he’s still just 27 this year and one of the most versatile players on the team, having lined out at wing back, centrefield and in the forwards, often as an orchestrator but two years ago as a fully-fledged strike forward whose 2-24 left him top scorer from play in that year’s championship.

The coming season is an inversion of the norm: club championship in high summer followed by the county activity from September onwards. This was already a challenging time with Dessie Farrell just having taken over the Dublin footballers, as they set out to win a sixth successive title, before the Covid-19 pandemic struck.

Then, All Star, former Footballer of the Year and contemporary Jack McCaffrey decided to walk away from the county, for this year, anyway – a decision Kilkenny “respects” while harbouring hopes the Clontarf stalwart will change his mind.

Football is back, though and his club Castleknock are in action this coming weekend in a neighbourhood derby against St Oliver Plunketts.

“Great to be back out on the field and playing football,” is the immediate response. “Even this morning being out in St Brendan’s pitches at the Kellogg’s Cúl Camps with all the kids practising their skills, it’s brilliant.”

Although his coming was long foretold from the time Kilkenny was a dual minor of such distinction that he played in two minor All-Irelands in a fortnight, he felt obliged to make a choice for the coming season.

“I was honoured with the task of being captain for the football team so I’m just playing football with the club team this year. I’ve been out pucking around alright, doing a bit of coaching in terms of hurling but I won’t be hurling with the club this year.”

He wasn’t even able to attend matches last weekend, as the club footballers were communing with nature.

“No, we had our own training at the weekend. We trained on Saturday morning, had a challenge game on Thursday, trained Saturday and then went and hiked up Tonelagee in the Wicklow mountains after that.”

He appears to have negotiated the wilderness of lockdown and what for a long time looked like an abandoned season without too much stress.

A primary school teacher, who by his own account “loves coaching”, his talents were put to good use with a sequence of brief training videos put together every day and posted on the internet, a process that sounds less intense that it was.

“Myself and my mam used to go down to Coolmine train station and we had a wall there and I did a skill there every day for nine weeks, and my mam video recorded it.”

A brief episode from his past proved helpful when he was compiling ideas for his coaching videos. In 2012 he left to sign for Hawthorn in the AFL but reconsidered in time to return for Jim Gavin’s first season as manager in 2013. It was a different training regime.

“They are very much into their combative type of training. They then do various different drills as well. Some of the Australian Rules football drills that I was doing would have inspired me in terms of the drills I was doing with the kids, so that was very helpful for that. I touched base with one of the coaches over there, just to give me a couple of ideas on what to do, and that was very helpful.

“They do a lot of ball handling stuff involving two balls. There are various combinations you could do. They focus a lot on ball handling. For the first 10-15 minutes of a session they would spend purely on foot and hand skills. You see a lot of football teams using it now, as well. You see basketball teams doing it too. Those skills are vitally important for kids to do, to use both sides – be it foot or hand skills.”

Ultimately, football is about playing – practice rather than theory and Kilkenny, like everyone else, is just happy that after an, at times, bleak spring the game is back with proper contested matches.

“It is such a strange time and to be even going out playing games, playing the games that we love, playing with your friends, we are just lucky to be in that position. We are just delighted to be playing games.”

Siún Brophy from St Brendan’s GAA Club, Dublin was the one millionth child to register for Kellogg’s GAA Cúl Camps. She was welcomed to the very first day of camps by Dublin players Ciarán Kilkenny and Sinéad Goldrick.