Brian Howard: ‘Nothing in’ Dublin and Tyrone’s Omagh fracas 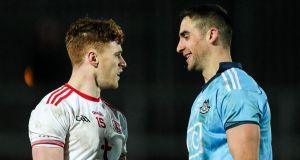 Dublin midfielder Brian Howard has brushed aside the suggestion there may be further repercussions from the half-time disturbance that suddenly whipped up during Tyrone’s victory over Dublin at Healy Park on Saturday night.

Level at the time, Dublin 1-2, Tyrone 0-5, both teams sprinted for the tunnel on the half-time whistle (in part to get some shelter from the storm) where for whatever reason players and backroom members from both teams suddenly got stuck into each other, caught by the TV camera positioned at the halfway line at the opposite end of the pitch.

Punches were definitely thrown, only it was hard to tell exactly who was throwing them.

“Well, I can’t comment because I don’t really know what went on,” said Howard, who added he was first down the tunnel and already in the dressing room by the time of the incident.

“It’s up to other people to investigate if they want. In my opinion, there was nothing in it, just two teams, two competitive teams, and when you come in, it’s a drawn game, with the conditions, both teams aren’t playing particularly well. There are hot tempers but no, there shouldn’t be any repercussions for either team.”

When they re-emerged for the second half, Tyrone midfielder Pádraig Hampsey was immediately black-carded by referee Cormac Reilly, and that may well be as far as it goes, given he was seen to deal with the issue at the time. Howard wasn’t anticipating any further action.

“Yeah, you want to want to focus on the football, all that over stuff comes with it, a load of nonsense, in my opinion. In terms of both teams just want to get on with it. I think we’re level on points at the minute, and have ambitions to go and win our remaining games. So the stuff that goes on behind the scenes is not something we can deal with, we just focus on the football.”

The GAA’s Central Competitions Committee are entitled to review video evidence, although neither Tyrone manager Mickey Harte nor Dublin’s Dessie Farrell also reckoned at the time that there was anything more in it.

“I didn’t see too much, just a lot of bodies in a confined space,” said Harte. “Maybe that was a good thing, that nobody could do any damage to each other.”

“I wouldn’t expect to lose anybody. We were the only one to lose a man at half-time, at all. Pádraig Hampsey got a black card out of it. We got a hint of it at half-time. Nobody else got anything, so I think we’ve served our punishment.”

For Farrell, it seemed, the disturbance was equally minor: “All I will say is that we came up here to play football and that was needless what happened at half-time. I could not see it. There were a hundred people in the tunnel ahead of me.”

It was far from tempestuous however, certainly not compared to the infamous Battle of Omagh in 2006, which include two second half brawls between Tyrone and Dublin, one of which spilled over onto the sideline, with four players sent off, nine later charged.

No player saw red on Saturday night, and it wasn’t particularly stormy play: Niall Scully was also black-carded for Dublin in the second half, the only other sin-binning, Dublin getting three yellow cards.