Brian Fenton: ‘I play Gaelic football for that roar’ 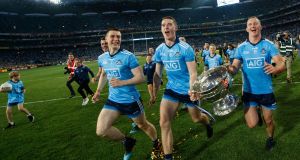 This was not the way Brian Fenton intended to go unbeaten with Dublin for another championship summer. Some football would be better than none at all, only without the buzzing crowds and bright afternoons it simply won’t be the same.

With confirmation this week of no intercounty activity before October at the earliest, it will be getting cold and dark before Fenton plays any more football with Dublin this year, if at all. He’s perfectly understanding of that in the face of something like Covid-19, but also gives the sense a championship summer belongs in or at least around its proper place.

“It’s certainly been difficult,” Fenton says of the GAA’s decisions around trying to plan for something. “At the start you were gauging it off world sport, and this is purely my personal view, like when they cancelled the Olympics, things like that, you’re sort of saying how can the GAA be the exception?

“But what can the GAA do really, other than base it off the HSE guidelines? As a player, of course you would love to be told it’s on or off, be ready for this date, but nobody is in a position to give that information.”

With his now five senior All-Irelands in a row, four All Stars, plus the 2018 Footballer of the Year award, Fenton turned 27 in March, and this month marks the six years since he made his championship debut in the win over Longford in 2015. He hasn’t lost a championship match since (winning 36, for those who are counting). Knockout or backdoor, limited capacity or behind closed doors, he also admits it’s going to be hard for the GAA to please everyone, whatever the eventual outcome.

“Luckily that’s not for me to decide, but I play Gaelic football for that roar, since I was 16, so it would be funny, and certainly difficult, to play behind closed doors. I don’t know would it sell to the players? From a personal point of view I would certainly prefer to be playing in front of a crowd.

“For sure, a knockout would also put everything on the line, pose different challenges, but it would be exciting if the crowds were able to be there. But you’d want it done the right way, and not forced into the few weeks before Christmas.”

With Dublin originally poised to make the league final, Fenton also admits he was “flying-fit” before everything was put on hold; for now it’s all about maintenance. “Initially, I was flying-fit yeah, never fitter actually, and thinking this was great. We’d had that delayed return after the holiday, into the league. I still feel good, but the foot has been taken off. I’m still around 80 per cent fit, but with no exact date, it’s hard to sustain that. We’ll all be trying to peak if games do resume, but for now it’s more maintenance, a little gym work.

“It has given also me an extra appreciation for being with the group, something maybe I’d taken for granted. That I’d always be with the lads during the week.

“It’s certainly given me a sense of how much I miss training, with the club and county. I’d give anything just to be out there. The social life too, which was part of football, and also just watching sport. You miss all that too.

“But I wouldn’t say it’s been a struggle, Dublin have been very good, given us a template of training to do around our own schedule. Of course motivation ebbs and flows, even when you are with Dublin, and there have been some periods when I’ve sat back and had a beer. But I certainly haven’t been down in the dumps over this period. Thankfully I’ve stayed quite positive, and with no real date in sight, we might ramp it up if we get that.

“I’ve also had a couple of college assignments and home exams [for his MA in business management at UCD], to keep me occupied. And I’ve been watching some GAA All-Ireland Gold too. I got a text one night from my dad, who was watching Derry against in an Ulster final 1991, or 1992, and he just said: ‘Watch Anthony Tohill and Learn’.”

Fenton was speaking by phone to help launch of R.E.S.T, a new mental fitness campaign developed by the GPA and WGPA in partnership with the mental health charity, Pieta, with a reminder of the importance of Routine, Exercise, Sleep and Talk during the pandemic. To find out more about Pieta’s Darkness Into Light Sunrise Appeal this weekend see www.darknessintolight.ie