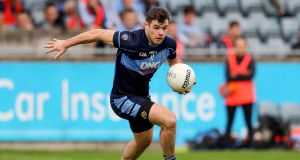 St Jude’s and Ballymun Kickhams progressed to the semi-finals of the Dublin senior football championship after their respective wins over Cuala and St Brigid’s in Parnell Park on Saturday evening.

St Jude’s have been a model of consistency in recent years and they reached their fifth semi-final in six years when beating Cuala by 0-16 to 1-7.

The template was set from the start with Jude’s building an early two-point lead thanks to scores from Kevin McManamon and Declan Donnelly. Three points in succession by Niall Coakley then pushed them five points ahead by the end of the first quarter.

Cuala eventually responded through a brace of points from Con O’Callaghan and a well-worked Conor Mulally effort, but late points from Mark Sweeney and McManamon edged Jude’s 0-9 to 0-4 ahead by half-time.

A Dara Spillane goal from O’Callaghan’s pass in the 33rd minute offered Cuala a modicum a hope but four second-half points from Donnelly were enough to see Jude’s home comfortably.

There was a dramatic start to the second match as Philly Ryan netted in the third minute for St Brigid’s and three Lorcan McCarthy points left the underdogs six points clear by the seventh minute.

A Dean Rock free and Paddy Small point helped settle Kickhams and they drew level by the 28th minute as Small palmed home after unselfish play from Eoin O’Neill. A late Paddy Andrews score inched Brigid’s 1-7 to 1-6 ahead by half-time.

Ballymun resumed impressively thanks to points from Rock, Small and James Burke to take the lead for the first time in the 37th minute.

They pushed on from that platform with Burke adding another point from wing-back and with Small excelling at full-forward, scoring 1-6 in total, and Rock accruing eight points, Ballymun advanced on a 1-17 to 1-9 scoreline.