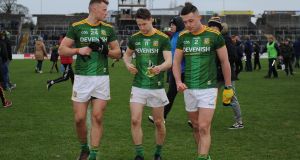 Meath will hope to ignite their Division One campaign against Mayo. Photo: Tommy Grealy/Inpho

Saturday [all throw-ins 7pm unless stated]

Dublin v Monaghan, Croke Park [eir sport and RTÉ 2]: Not only are Monaghan on a three-in-a-row against Dublin in the league but of the previous six fixtures, all won by the Dubs, four were one-score matches – three of which Monaghan lost by just a point. The visitors are in buoyant mood for this as well, nearly at full-strength and with some decent form behind them – unlucky not to get something in Galway and too good for Tyrone. The All-Ireland champions have also done well, riding through new management and a late ending holiday to go unbeaten in the first two while giving exposure to some new faces. Muscle memory kept them going against Kerry whereas Mayo faded.

Armagh v Kildare, Athletic Grounds [eir sport]: The two front runners on day one, both came unstuck on day two. Armagh have a better alibi in that they started very poorly and although improved off the bench, couldn’t make inroads on a decent Laois team. They will hope to better here with Rory Grugan and Aidan Forker back in the mix. Kildare were the latest to find that Ennis can be a tricky gig but Jack O’Connor would be disappointed that the team could obtain no better outcome in a tight finish.

Mary Immaculate v IT Carlow, 2pm; UCC v DCU, 4pm: Still smarting from how close they were in last year’s semi-final against the ultimate winners, DCU again take on UCC in this year’s second semi-final, which is likely to produce the eventual winners. The Dublin college probably aren’t as accomplished as last year but do have home advantage and defeated the holders in November’s league final. UCC with All Star duo Darragh Fitzgibbon and Mark Coleman are however favourites. In the first semi-final IT Carlow, who have become a consistent force under DJ Carey, won’t be far off the pace and should also make the final.

Sunday [all throw-ins at 2pm unless stated]

Meath v Mayo, Páirc Tailteann [Live on TG4 YouTube]: Third match in, it’s early for alarm bells but this has become a ‘must win’ match in a way for both teams: Meath if they’re not to become early-season relegation write-offs and Mayo if they intend to defend their league title. Meath’s defence has been taking time to acclimatise and the goalkeeping drama hasn’t helped but against that James Horan is running auditions and there are concerns about Colm Boyle’s fitness after last week’s knock against Dublin. They should however have enough know-how to take the points.

Donegal v Galway, Letterkenny [Deferred, TG4]: Pádraic Joyce has overseen a match they were lucky to win and one they were unlucky to lose but a pleasing vibe has settled on Galway football as the county enjoys ‘the new direction,’ as they say in music. Donegal are unbeaten but probably feel they should be 100 per cent after slipping up against Mayo. Both teams are trialling but have looked sprightly in attack – Donegal with Jamie Brennan buzzing, put three goals past Meath and missing a penalty. The visitors have been up for it though and can spring a mild surprise.

Tyrone v Kerry, Healy Park [Live, TG4]: Last year’s All-Ireland semi-final revisited but already it appears a long way away. Cathal McShane’s deliverance from the clutches of the AFL is a relief for Tyrone, as so far performances have been mediocre and if there’s no pick-up in the near future they’ll struggle to stay afloat. Kerry have started well, just like last year, and their tight-rope act in Tralee last week was a sign of mounting confidence. The sight of green-and-gold should rouse a response from Mickey Harte’s side but have they the wherewithal to cope with Kerry’s class up front.

Westmeath v Fermanagh, TEG Cusack Park: Sickener for Westmeath last week getting turned over by Cavan after such a good start. Their indiscipline cost them even if the opposition weren’t much better. This is now an important match with an eye on the table and Fermanagh were in good form last week, clipping the Connacht champions and they can take this.

Laois v Cavan, MW Hire O’Moore Park: After successive promotions Laois were expected to run out of puff a bit but Mike Quirke has had a brilliant start to the campaign, which sees them top the division. The bad news keeps coming for Cavan manager Mickey Graham and he has now lost Niall Murray, possibly for the rest of the season, to a quad injury. The week probably won’t improve.

Roscommon v Clare, Dr Hyde Park: The campaign has turned into something of a nightmare for Anthony Cunningham. Inexplicably losing a comfortable lead in injury-time of the opening match to Laois and then, doing kind of the same thing on a different timetable against Fermanagh might have knocked promotion on the head already but for the volatile nature of the division. Clare put a stop to Kildare’s gallop and will fancy this but the home side can survive.

Derry v Tipperary, Celtic Park (throw-in: 1pm): Struggling and winless Derry have the chance to get back on track but the visitors, despite their celebrated absentee list, have ground out results to stay unbeaten. This will be a litmus test but Derry can squeak it.

Longford v Leitrim, Glennon Bros Pearse Park: Cross-province neighbours meet in what feels already like a relegation four-pointer, which may be unflattering to unbeaten Longford and their visitors who just lost their grip on Cork before half-time the last day. Leitrim are a physically strong outfit but Longford look the better bet.

Louth v Offaly, Gaelic Grounds: Louth welcome Offaly to Drogheda and are already in difficulties. They surprised many last year with a good campaign but are now one of only four counties in the whole league without a point. Offaly had to scramble to get their point from Longford but will smell blood here.

Cork v Down, Páirc Uí Chaoimh: The point’s been made: it’s 10 years since this was the All-Ireland final and just four seasons ago both were in the top flight. Early signs make them favourites to get out of Dodge before the dreaded Tier 2 rides into town. In the immediate frame, Cork with Ciaran Sheehan picking up steam can maintain their 100 per cent start.

Carlow v Limerick, Netwatch Cullen Park: Not a great result for Carlow after a catastrophic first half in Wexford last week and pressure for promotion is intensifying. Limerick have made a huge start to the season but the home side really need this.

Wicklow v Sligo, Aughrim: A fine start in the division for Paul Taylor’s side, previously mainstays of Division Three until the sorrowful mysteries of 2019 intervened. On paper this isn’t the visitors’ hardest fixture even if it’s not a given.

London v Antrim, Ruislip: Antrim’s positive opening weekend was set back by Sligo but this is an opportunity to get back on track even though London wouldn’t let go of Limerick last week.

1 Germany well ahead of the curve as Bundesliga gears up for return to action
2 My favourite sporting moment: Roscommon minors restore pride to a county
3 Stephen Kenny: ‘I want people to come and look forward to watching this team’
4 America at Large: Hurling fan Dowling leading the fight against Covid-19
5 Cheltenham cited Boris Johnson’s Twickenham trip as a reason for Festival green light
Real news has value SUBSCRIBE