No smash and grab effort against Derry from Leinster side 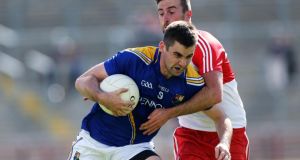 Longford’s Kevin Diffley gets past Derry’s Mark Craig in the GAA Football All Ireland Senior Championship Qualifier Series Round 1A, at Celtic Park, Derry, at the weekend. Photograph: John McIlwaine/Inpho

Longford might have needed a 66th-minute goal from substitute Mark Hughes to seal victory over Derry at Celtic Park but this was no smash and grab effort from the Leinster side.

In fact it would have been an act of larceny had goals from Benny Heron and Mark Lynch in the 61st and 64th minutes salvaged a result for the hosts that they never deserved.

In fairness to Derry manager Brian McIver he was down to the bare bones with an injury crisis seeing his side start without seven of the players who lined out in the narrow Ulster Championship loss to Donegal. Whatever the mitigation Longford were the superior side for the vast majority of this game as Derry failed to cope with their incisive counterattacking style.

Early on things had looked good for Derry as James Kielt (free), Enda Lynn and Terence O’Brien kicked them into 0-3 to 0-0 lead. By the 15th minute Longford were level through two Seán McCormack frees and a Brian Kavanagh point.

Derry stretched ahead again thanks to series of super long-range scores from Lynch (three) and Kielt but with Longford on top at centrefield the warning signs were there as Thomas Mallon was twice required to make one-on-one saves from Paul Barden.

In the closing stages of the half Longford made their superiority count. Half-back Colm P Smyth started the charged with a point before Barden slammed the ball home for a 30th-minute goal. With McCormack and Barden adding further points Longford led by 1-6 to 0-7 at the break.

Derry briefly threatened after the interval as Lynch had a fisted effort cleared off the line but Shane Mulligan and Michael Quinn extended Derry’s lead with points from quick counterattacks.

Derry’s were thrown a lifeline as Heron drove a low finish home after the ball broke to him in the square. A McCormack point should have settled Longford but Derry captain Mark Lynch powered through their defence and rocketed the ball to the goal to level the score at 2-11 to 1-14.

The stage seemed set for Derry to assert themselves, but almost immediately Mark Hughes found himself in acres of a space to round Mallon in the Derry goal and blast home. When Francis McGee followed up with a well-taken point Longford were four points to the good at 2-15 to 2-11.

Derry responded with points from Lynn and two from Kielt got them back to within a single point as the game entered injury-time. But James Kavanagh’s nerveless 30-metre free provided Longford’s insurance point to seal Longford’s third qualifier win over the Oak Leafers.