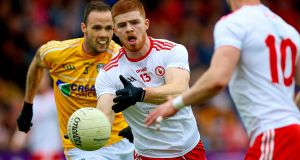 He’s not gone yet, but he’s going there – Australian Football League (AFL) club Adelaide Crows confirming they have secured a pre-season trial for Tyrone All Star forward Cathal McShane later this month.

There were reports last week that McShane had initially attracted the interest the Brisbane Lions, who have a little more history when it comes to signing GAA players, only for the Adelaide club to seemingly swoop in ahead of them, confirming on their Twitter account: “Irish prospect Cathal McShane will join our pre-season training program in January.”

“He has the physical attributes, coming in at a touch over 190 centimetres. He’s also strong in the air and can kick on both feet. Once he lands in Adelaide, it’ll provide the opportunity to understand more about our club, our philosophies and what our programme looks like.”

Joint top-scorer in the 2019 All-Ireland championship with his 3-48, McShane’s exit would represent a major loss to Tyrone in 2020. However at age 24 there is no guarantee he will make a successful transition.

In the meantime Tyrone manager Mickey Harte reiterated his belief that the GAA was doing itself no favours by courting any sort of relationship with the AFL. “It’s a bit sad that that used to be the job of some unknown scouts from Australia, but now it’s ex-GAA people in Ireland who are scouting our players to take them away to another league, which is no benefit to us whatsoever,” he said.

“It’s one-way traffic, it’s bonus-bonus for AFL, it’s loss-loss to us. It doesn’t make much sense to me, and that we would still engage officially with that outfit when that’s going on saddens me, to say the least.”

Harte however also expressed some hope that McShane would return to Tyrone in the coming weeks. “I gave him my views on what I thought in my heart and soul would be best for his career, both on and off the field, and the very simple answer was that I thought it would be best served by being here.

“He has to take that on board, and he has to look at what may be on offer elsewhere and he has got to make that decision. It’s his final decision, and I respect him for that. He is going out to examine the situation out there for himself, that’s for sure, but he has not signed anything yet to say that he’s gone.”