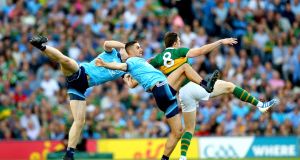 An All-Ireland football final six days before Christmas Day, with extra-time and penalties if needed, with conclude the revised 2020 GAA championship structures as announced by Croke Park on Friday.

As expected, the football championship will follow already agreed provincial competitions and will be staged as a straight knock-out. As already agreed, the club championship window is to last 11 weeks, ending on October 11th. Intercounty training can only resume on Monday, September 14th, before the intercounty completion resumes on October 17th, the first two weekends being taken up by the final two rounds of the Allianz Football League.

Whoever tops the divisions will be declared champions; there will be no league finals.

The opening round provincial football games will then start on October 31st, which means by the time the 2020 summer championship begins, the clocks will have already gone back for wintertime. The All-Ireland final is then down for December 19th, six days before Christmas, and two days before the shortest day of the year.

Roscommon will still play London in the Connacht football championship, pending confirmation of travel arrangements, but New York will not take part this year. All games will be decided on the day, up to and including the All-Ireland final.

The question of having an entirely open draw was addressed by Croke Park, but it was decided the provincial format, with the five additional titles that come with it, was preferred. It was also agreed to conclude the championship within the calendar year to limit the impact on the 2021 season, and while there will be no defined penalties for intercounty teams who break the return to play dates, Croke Park will be observing the issue nonetheless.

The under-20 football championship will be played out, as the All-Ireland semi-finals are ready to go and were supposed to be played on St Patrick’s Day. Decisions on venues will be decided at a later date pending updates on crowd capacities around Covid-19 restrictions.