Éire Óg get the better of moody Blues 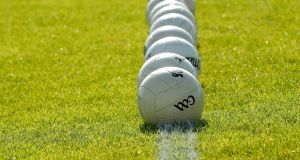 Their hosts, Newtown Blues barely raised a whimper throughout, and finished the game with just 13-men following late red cards for Jamie Kelly and Andy McDonnell. The goals proved a double whammy for the home side.

Éire Óg direct approach caused them problems from the start, and it was a measured Chris Blake delivery into Ware that carved out the opening goal for the big full forward on 18 minutes.

The Blues had barely recovered from that body blow when another high ball into the danger area broke to corner back Brendan Kavanagh, who fired low to the corner of the net.

Jordan Morrissey and McDonnell traded points in the run in to half-time as the Carlow men retired with a commanding 2-5 to 0-5 cushion.

The Blues squandered two chances to reduce the deficit and Hugh McGann was denied a goal by a reflex save by Robert Moore. They paid dearly for those misses when Simon Rae, Ross Dunphy and Darragh O’Brien extended Éire Óg’s lead to nine points.

Rae kicked the Carlow champions’ last score with around 15 minutes plus stoppage time still to play. The home side’s frustrations got the better of them as Kelly received a straight red card and McDonnell followed moments later, picking up a black card to add to an earlier yellow.