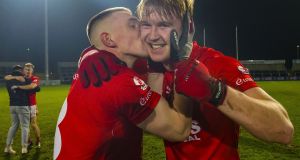 In Carlow, Éire Óg carry their history around like a fading tattoo. They don’t need to look to know it’s there and they only bring it out to show it off when the occasion demands. Well, here we are. Tomorrow they play in their first Leinster club final in 21 years so it’s only natural that people are calling by for a look.

With the might of Ballyboden St Enda’s standing between them and provincial success, a certain amount of David v Goliath chat is inevitable and all too easy. But the truth of it is that one of these teams is a giant of the Leinster club championship and it isn’t the Dublin side. Throughout the 1990s, Éire Óg were close to untouchable in this competition, playing in five Leinster finals and winning them all – three of them against Dublin teams, as it happens.

Benny Kavanagh was a kid at the time, skittering around the place unbound, a private in the urchin army that followed Éire Óg everywhere. It was the time of his life. Winter Sundays that passed in a flash, road trips here and there, even the odd St Patrick’s Day in Croke Park. He grew up to be a Carlow footballer – being an Éire Óg child in the ’90s didn’t leave him with a whole lot of choice in the matter.

“It was always there,” Kavanagh says. “You’re always trying to emulate what they’ve done because that’s our history. No matter who you talk to wherever you go in the country, as soon as you mention you play for Éire Óg in Carlow, automatically people start talking about those teams of the ’90s. That’s what you’re known for.

Some of my best friends, their dads played on those teams. And to them, it’s like, ‘Well, it’s only my father, like.’ But to me, growing up, they were the biggest superstars you could ever imagine

“And it’s not that we’d be trying to better them because that was a different time. We’re in a different era of football now and it’s 21 years since we were last in a Leinster final. But the thing about it is, they were idols to us. They were my absolute idols growing up. It wasn’t soccer players, it was the lads that lived down to street

“All my friends, all the lads I grew up with, we didn’t have to go looking for heroes anywhere. They were the men and they were right there on our doorstep. As soon as I picked up a ball, I wanted to be where they were. And we’re kind of getting there now, eventually.

“All those lads, they’re at the games now, their sons are on the team some of them, it’s great the way it has come around again. Some of my best friends, their dads played on those teams. And to them, it’s like, ‘Well, it’s only my father, like.’ But to me, growing up, they were the biggest superstars you could ever imagine.”

The tide came in and the tide went out. Éire Óg were never going to fall too far in the great scheme of things in Carlow but they did go from winning six titles in seven years to only picking up three of the next 13. They’ve since strung together the past three in a row but getting their legs underneath them in Leinster has been a gradual process – they’ve gone one step further in the competition each year.

“We lost to Mullinalaghta last year and the thing we took from that was that we needed much better strength in depth in our squad. When you go and play in Leinster, especially at this time of year, the physical demands of it are massive.

“The thing about playing in your own county championship is, you know what to expect. You know all the different players and you know who the ones to look out for are. When you play against the champions of another county, not alone are you coming up against other intercounty players, you’re coming across lads who are very close to that standard who you might not be familiar with at all. They’re physically developed and ready to make that jump to intercounty and that’s where we needed to get to with our strength in depth.

“We’ve worked a lot on that over the past year. We knew we had a good squad of players and that we would hopefully go well in Carlow. So our aim was to get back into Leinster and give it a real crack this time around. This time of year, it comes down to the real basics of football. The ground is softer, the ball moves slower. So physicality becomes more important. There’s no fancy stuff. It’s win the ball, move the ball and your conditioning is such a big thing.”

In the opposition dugout tomorrow will be a face familiar to half a dozen of the Éire Óg players. Anthony Rainbow did a two-year stint over Carlow in 2013-14, with the likes of Kavanagh, Sean Gannon and Eoghan Ruth in the mix. Kavanagh was his captain one of those seasons and though it ultimately was a fairly torrid time results-wise for Carlow, he still remembers Rainbow with some fondness.

“I’d have great time for him,” Kavanagh says. “He gave his best in the time he was there and he knows a lot about us from that time. I’d say there’s four or five of us who played under him. Anthony is a brilliant coach, I found anyway.

“His time with Carlow probably didn’t go great – he wasn’t long retired from playing and it would have been his first big job as a manager I suppose. We could see he was giving his all but maybe he just didn’t have the players that would come on-stream in the couple of years after he left. We liked him and he brought some great ideas to Carlow football. You need to have the players to fulfil what you want to do.”

Some people look at these games as Carlow taking on Dublin. That’s not how we see it. We know Ballyboden are a very good team but we don’t look at them like they’re Dublin.

So impressive were Boden in their semi-final against Garrycastle that the 1/6 odds about them finishing the job tomorrow don’t look too far wide of the mark. Even without their class the last day, the fact that it’s the Dublin champions against the Carlow ones obviously gives the fixture a certain context. But as Mullinalaghta showed last year, that context counts for nothing in reality.

“Some people look at these games as Carlow taking on Dublin,” says Kavanagh. “That’s not how we see it. We know Ballyboden are a very good team but we don’t look at them like they’re Dublin. You have to give them respect – they were All-Ireland champions in 2016. But you can’t get mixed up on it either. It’s a club game and we deserve to be there on the strength of what we’ve done.

“We have a good balance to our team, we have good strength in depth, we can play ball, we can mix it. You don’t fear any team. We go out to give a good account of yourself and we know that we beat anyone on our day.

“Everywhere you go in town, in and out of shops, bumping into people, all anyone wants to talk about it the match. Over the last few weeks, it has been a snowball effect. The further you go, the more buzz there is. Once you’re in the Leinster championship, it sort of takes on a life of its own. As the games go on, it builds and builds between games. It shortens the winter, that’s for sure.”

How do Klopp’s Liverpool measure up against greats of past? 22:08
FAI to allow Limerick apply for licence to play in First Division 21:51
Welcome to Iten in Kenya – home of champions and cheats 20:00
Latest weekend Premier League team news 19:15
Centuries from Pope and Stokes put England on top of things in third Test 18:49
Crossword Get access to over 6,000 interactive crosswords