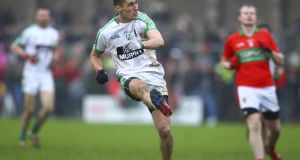 Kildare champions Moorefield performed the definitive Leinster club ritual. They came to Aughrim, took on the local champions, were reduced to 14 in the pouring rain and still ran out emphatic winners of Sunday’s AIB provincial football semi-final.

To be fair to Rathnew, surprise conquerors of holders St Vincent’s, the match was still just about reachable going into injury-time, as they trailed by four, but a surging run by young Mark Dempsey after he had intercepted a wayward pass culminating in a 1-1 with Eddie Heavey and an assured finish by the 18-year old wrapped it up with a festive ribbon for the Newbridge club.

Dempsey had an afternoon to remember. Marking the opposition’s elder statesman Leighton Glynn he did a solid job – without achieving full-scale domination – and another interception early in the match had been the catalyst for the first goal.

In such challenging conditions it was to the winners’ credit that their victory was built on quality shooting rather than Ypres style advances. Éanna O’Connor kicked eight points between flawless dead-ball duties and a couple of points from play whereas in the first half particularly, Niall Hurley Lynch persecuted his marker Paul Merrigan, submitting a final bill of 1-3 fro play.

Rathnew simply didn’t have that firepower and lost key forward Eddie Doyle to a black card in the 41st minute for blocking. Their total of 1-1 for the second half left them training all the way home and in truth never looking like making up the deficit even after Cian O’Connor’s intemperate lash at Leighton Glynn earned him a straight red in the 37th minute.

There was such a ferocious wind blowing in Joule Park that the half-time stalemate of 1-5 each had the look of a sizeable advantage for Moorefield. They had started well with Hurley Lynch taking a lovely kicked pass from Heavey and firing in the goal with the slight help of a deflection.

The Kildare champions held the lead from then on apart from just before the break when a piercing run by Graham Merrigan was capped with a zipping shot that came off a defender to ricochet into the net. That put them 1-5 to -14 ahead but before the whistle O’Connor had dispatched a great kick into the gusts protecting the Rathnew goal for an equaliser just at the break.

An eventful contest for the O’Connors continued with Éanna unlucky to clip the post with a carefully slid shot five minutes after the resumption, followed shortly a couple of minutes later by Cian’s dismissal, while their father, All-Ireland winning Kerry manager Jack dispensed advice to Moorefield manager Ross Glavin thoughout.

“He’s great to have around because he’s a hugely experienced coach,” enthused Glavin afterwards.

His team defended doggedly, blocking a 48th-minute goal chance for Mark Doyle, with Ian Meehan working tirelessly back to augment the defence and Rathnew found chances hard to come by. As the match was settling into a sequence of carefully executed raids by O’Connor to push the margin to four, 1-10 to 1-6, a beacon of hope was lit for the Wicklow side.

In the 45th minute a long ball into James Stafford, who was becoming more influential in the second half as he pushed up, resulted in a penalty when the former county centrefielder – lucky subsequently to get just yellow for a similar foul to Cian O’Connor – was taken down. Glynn converted the award perfectly and the match was breathing again.

Rathnew wouldn’t score again and Moorefield simply and painstakingly rebuilt their four-point lead before embellishing it in injury-time.

The winners will take on their former manager Luke Dempsey and his St Loman’s team in the final on 9th December.

“We’ve had a good year,” said Rathnew manager Harry Murphy, “but we’re gutted now to lose but in fairness we couldn’t have any complaints.”

Glavin fretted slightly about yet another red card – they got two in the county final: “It’s frustrating that we are losing our discipline at times… Our players have been used to that situation, the recent experience has helped them to adapt to where the space is or what type of shape to keep.”