Éamonn Fitzmaurice: Kerry decision was made in July

Kingdom boss: ‘We need to win a match against Dublin, and we need to do it soon’ 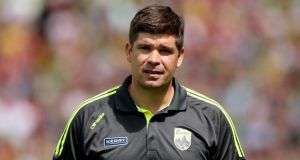 Kerry boss Éamonn Fitzmaurice: ‘We need to win a match against Dublin, and we need to do it soon.’ Photograph: Inpho

Éamonn Fitzmaurice has said his decision to stay on as manager of Kerry was made in July, after the Kingdom’s Munster final win over Tipperary.

On Tuesday it was announced Fitzmaurice had agreed a new deal which would extend his tenure to 2018 - making him the longest continuous serving Kerry boss since Páidí Ó Sé.

But it was known Fitzmaurice would be staying on before Kerry’s All-Ireland assault had begun. Speaking on RTÉ Raidió na Gaeltachta on Wednesday, he said: “I spoke to Patrick O’Sullivan during the League, and again after the Munster Final in July, and I had made the decision by then really, the players knew I was staying, but there was an official process to go through to get approval from the County Board.”

However despite a good record during his four summers in charge, during which he has lost just three games, Fitzmaurice and Kerry have been unable to shake the Dublin monkey from their backs.

Dublin beat Kerry in 2013, and 2015, and this year it was Jim Gavin’s side who once more ended the Kingdom’s summer before they could get their hands on Sam Maguire.

And Fitzmaurice acknowledged that Kerry have ground to make up on the defending All-Ireland champions, he said: “Dublin have the upper hand on us at the moment, and it’s hard for any Kerryman to admit that.

“We need to win a match against Dublin, and we need to do it soon. We have what it takes.

“We had a good league, but we weren’t good enough against Dublin in the [league]final. We had four or five important players missing, but at the end of the day Dublin were the better team.

“We have the fitness and the skill as well, but the change in Dublin’s mental strength in the last six or seven years is very clear, how good they are when they’re under pressure.”

Referee David Gough was booed off the Croke Park turf by Kerry fans after last month’s semi-final defeat, with one incident involving Peter Crowley and Kevin McManamon attracting particular ire from the losing side.

But Fitzmaurice has maintained Kerry should have beaten Dublin regardless of the referee’s performance, he said: “The referee made mistakes on the day but even with the mistakes, we should have won.

“We made mistakes, particularly in the last 10 minutes and they are costly mistakes. We need to improve our composure at the end of matches, that’s our challenge for next year.”

Fitzmaurice has also conceded substituting forward Paul Geaney in the 67th minute of the Dublin defeat was an error of judgement, he said: “Perhaps we should have left Paul on the pitch. He’s the best forward in the country at the moment.

“It may have been a mistake. But the analysis always points to the person who’s not there as the key to a win, but that’s too easy.”