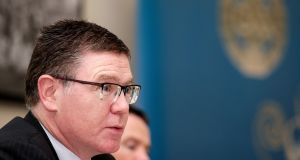 Director general Tom Ryan at the launch of the GAA annual report at Croke Park on Tuesday. Photograph: Laszlo Geczo/Inpho

Some counties might argue that you cannot put a price on success, at least not when trying to match Dublin’s recent run of it in football, although spending caps may need be introduced to stem what GAA director general Tom Ryan describes as “a trend that simply cannot continue”.

In his second annual report since taking over the position in 2018, Ryan doesn’t shy away from the “increasingly pressured” financial landscape within the association, particularly when it comes to preparing and fielding senior inter-county teams.

The 2019 financial report is buoyant, showing total annual turnover of €118 million, up 11 per cent on the previous year, including central revenues which surged by 16 per cent to €74 million.

However, the rising cost in preparing senior teams – which amounted to almost €30 million in 2019 – is neither sustainable nor desirable, and may need to be addressed through new rules and spending caps.

“My principal financial misgivings are not revenue-related, however,” says Ryan. “The combined cost of preparing and fielding senior inter-county teams for the 32 counties came to €29.74 million in 2019. This was an increase of 11.6 per cent over the previous year, a trend that simply cannot continue.

“Counties have largely managed to grow their incomes this year to keep pace with increasing costs. Indeed, the overwhelming majority of counties returned surpluses this year. But that is not the point. This is not sustainable in the long term.

“This outlay represents a huge proportion of our collective resources. So, the other unseen cost is of all the other GAA plans in a county that are foregone or neglected – coaching, club support, facilities and so on. The origins of these costs are many. The scale of professional expertise engaged with teams is ever increasing, and the size of panels similarly. There is a responsibility at national level too, with the extent of the inter-county season.”

Ultimately, Ryan suggests, there may be a need for a sort of cap, albeit within the amateur realm: “The solution may well be with rules and spending caps. I am hesitant because our track record with similar rule-based enforcement around county teams is mixed. The solution has to start with a collective recognition that we take collective responsibility and start to reverse the trend.”

It follows a similar warning from Connacht secretary John Prenty in his report to last month’s annual convention, where he described the ever-increasing cost of inter-county preparations as a “runaway train”.

For the five county committees within the province over the last decade, in 2010 the total expenditure came to just over €6 million, and by 2019 it had effectively doubled to almost €12 million.

Financial matters feature elsewhere in Ryan’s report, and as the former director of GAA finance, he is well versed in these matters. The redevelopment of Páirc Uí Chaoimh is singled out as an example of why “future projects must be controlled centrally with appropriate oversight”.

Originally estimated to cost €78.5 million, an ultimate cost of €96 million is reliably projected, with bank borrowings currently standing at €21.5 million, with Cork County Board debt also owed to Croke Park of €10 million.

“We must engage professional project management expertise,” Ryan says of future stadium development projects, with Newbridge, Navan and Waterford all currently embarking on such work. “Central Council funding must also be issued proportionally with progress rather than up front. Projects can only be permitted to start when all the funding is in place, and does not proceed contingent upon future income.”

Those thoughts also spill over into the continued planning issue of the Casement Park redevelopment in Belfast: “Panning approval is not the only hurdle, however. The NI Executive’s budget approval dates from 2010/2011. The commitment was to deliver the strategic requirements of the three sports [rugby, soccer and GAA] at a total budget of €110 million at that time. So we will need to secure additional public funding to ensure delivery of the Casement Park stadium.”

The Carlow native also addresses the issues of fixtures, governance and looks to future aspects of the association, including the relationship with the camogie and women’s football associations. Ryan also points to a motion coming to Congress 2020, which takes place in Croke Park on February 28th/29th, as a means of addressing governance.

“There is a proposal that will significantly bolster our rules in this regard, allowing for national intervention in matters in a unit in certain circumstances. A further proposal provides for the appointment of independent persons to county committees and provincial councils.”

The acquisition of Clonliffe College beside Croke Park, some 31.8 acres in all, will allow for the building of two new full-sized 4G GAA pitches, with 1.1 acres also set aside for the construction of a 200-bed hotel.

The improved relationship with camogie and women’s football, says Ryan, has been steady, but he adds: “At this stage, I think we all agree that our eventual goal is not amalgamation or takeover. Instead, it is likely our ultimate shape will be something of a partnership, and a combination of equals.”

Congress is also set to unveil a new cup name for winners of the tier-2 football championship, which comes into play this summer.

Croke Park stadium director Peter McKenna, in announcing €10.5 million revenue to the GAA, said that no concerts were likely to take place at the venue this summer, as most bands capable of filling the 80,000 capacity aren’t touring European stadiums due to the Euro 2020 soccer finals being held in 12 different cities, including Dublin.