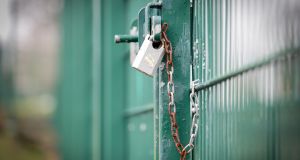 The GAA will open all pitches for adult training from next Wednesday, June 24th. File photograph: Inpho

The GAA’s Covid-19 advisory committee has confirmed it will open all pitches for adult training from next Wednesday, June 24th.

Taoiseach Leo Varadkar announced on Friday evening that all sporting events could resume from Monday, June 29th, allowing the GAA to accelerate its scheduled resumption plan.

Pitches will now open for non-contact training (on the understanding that players and all participants have completed the eLearning module and are following the control measures in place) in four days, with a maximum of 15 players in a designated area of the field. That will apply to teams in Leinster, Munster and Connacht, while in Ulster only 10 players will be allowed in a designated area of the field.

Contact training and challenge games will be allowed for all grades from June 29th, although the association awaits guidance from the Northern Ireland executive in relation to Ulster counties. They also await clarification on what will constitute a close contact versus a casual contact.

Club fixtures will be allowed from Friday, July 17th, two weeks earlier than initially planned, giving county boards longer to complete their championships. There’s been no change to inter-county dates (September 14th for training; competitions to start on October 17th as planned).

Restrictions on participants attending training sessions and matches are also to be relaxed from June 29th – subject to the government’s specified maximum of 200 people permitted to watch sports.

Dressing rooms are to remain closed until July 20th. The GAA Advisory Committee is considering its position in relation to other GAA buildings such as club bars that are serving food, gyms, handball alleys and guidance will be provided before June 29th.

Pitches will open for minor and below for non contact training from Saturday, June 27th. These changes have been subsequently endorsed by the GAA, the Camogie Association and the LGFA.